Blooms of the genus Dianthus are perhaps some of the most widely known flowers to both gardeners and non-gardeners alike. While the family has over 300 species and many hybrids a much smaller number are commonly offered by retail sources for the home garden. The genus contains annuals, biennials and perennials however, many are treated as annuals regardless of their botanical nature. Dianthus of all sorts are classic cottage garden flowers whose foliage forms grey-blue or grey-green mats with the flower stems rising in early spring. They are commonly called pinks by UK gardeners but almost always referred to by their genus name in the US.

Dianthus barbatus or sweet william is a staple of our spring gardens. Although biennials, sweet williams are often treated as annuals in California and replaced from 6 packs each year. I cut mine back every year after they go to seed and accept with grace whatever hangs on til the next year. Once the biennial/seed cycle is established I pretty much always have some in the foliage only state and others bloom ready. There are tons of named hybrids, so many so that they often are not even marked with their variety but only bear a color designation. 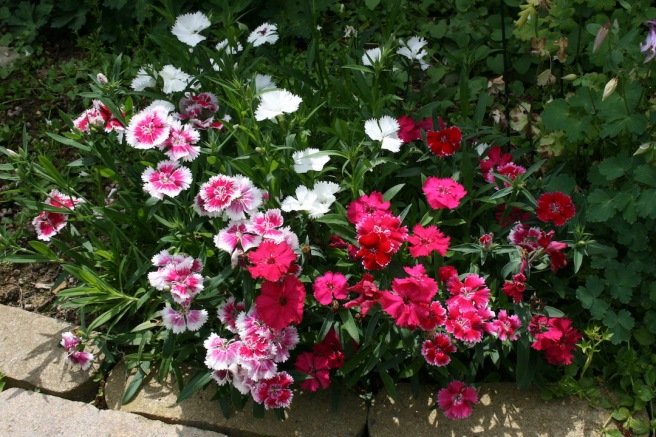 I am sure these are very familiar to everyone! I place them to serve as low edging material in the very front of my beds. They come as go as they please so every few years I may add in another 6 pack or two.

A few years ago I started buying every different dianthus species I came across just to see how the ones less familiar to me could be used in my beds. These included named varieties of Dianthus deltoides (maiden pink), Dianthus gratianopolitanus (cheddar pink) and Dianthus caryophyllus (carnation or clove pink.) For the most part they have stayed in the front of the borders and beds and they have been carefree with the exception of an occasional hard cut back to stimulate new foliage.

Two of my favorite clove pink selections are from the Devon Cottage Series of Dianthus caryophyllus bred by Whetman Pinks of the United Kingdom. After a few years in the ground they have formed nice big clumps of foliage with lots of flowers. This series is a great cutting selection and if they have any fault, it is that they are floppers once the flowers open. Even though the flowers are only about 12-14″ tall my plants end up with alot of props! As the common name suggests, the flowers have a wonderful clove scent.

This is Devon Cottage ‘Fancy Knickers’. You can see that the size in bloom rivals the erect foliage of the iris they neighbor. This clump is about 18″ in diameter.

The bloom is bright white with just a hint of a pinky red eye. Every stem has multiple buds which bloom in succession. Deadheading is a must to keep the bloom vigorous and the plants neat looking–I find this to be true of all dianthus.

I also love the clear pink Devon Cottage ‘Rosy Cheeks’. In the ground a few less years, the overall plant size is smaller but the blooms still hover at the foot tall mark.

Here are a few others blooming now! 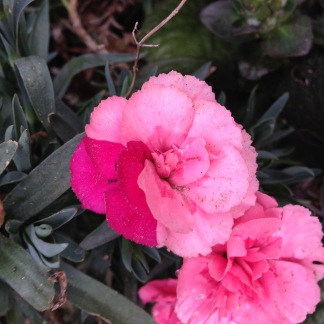 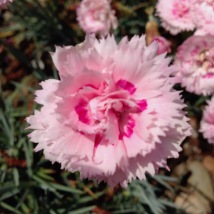