I have never had spectacular success at growing lavender. My current analysis is that I have included most as ‘one of’s in mixed beds of perennials and roses which require much more summer water than is preferred by lavender. I’ve got the Mediterranean climate part of the picture right, just not the companions and cultural practices they favor.

In the lawn removal/bed design we completed very early this year I included  a grouping of 5 Anouk lavender, Lavandula stoechas ‘Anouk’.

Although they did not bloom spectacularly well in their first summer I’m taking the position that they were settling in, just getting the feel of their new digs and will wow me in 2019. I feel confident that this new bed which is filled with unthirsty selections and receives good summer sun with allow them to flourish in most conducive conditions. And so the lavender bug is buzzing around my head again for the current and much larger remaining lawn removal effort. I plan to include another grouping of Anouk lavenders for continuity but have been keeping my eye out for a few other cold hardy varieties to pop in here and there. Not an easy task as new garden center stock virtually disappears by November 1st when holiday plants and Christmas trees seem to descend from nowhere.

When I visited Morro Bay the last week in October I squeezed in a little nursery shopping time and picked up a lavender with startlingly white foliage with plans to add it to the new bed diagonally across my front walk to play off the similarly hued foliage of an existing plant, Salvia apiana ‘Compacta’. 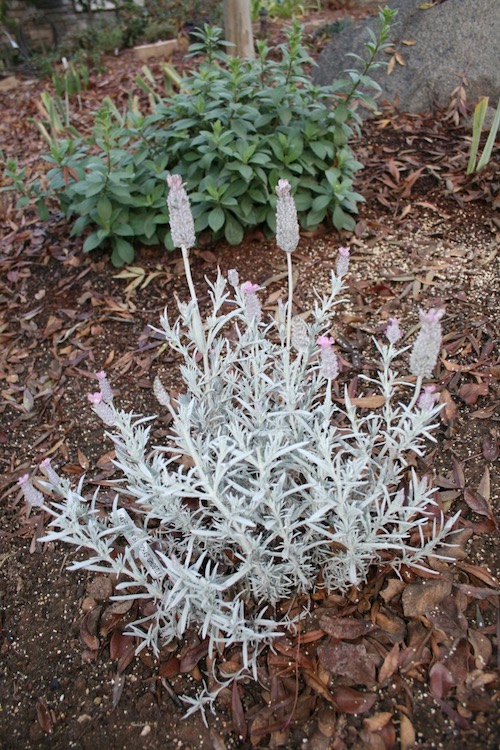 This is (as was marked) Lavandula stoechas ssp. pedunculata ‘Ghostly Princess’. In mid-November I dug it in what I planned to be a temporary spot as I was clearing out a few other elements which had been crowded into a small bed at the base of a crape myrtle–this bed will now be part of the larger bed opened up by the lawn removal. As I did with the first project last year I have spread plants in the original small beds further out into the newly opened areas to blur the old bed lines and allow them more breathing room.

In doing a little research on this plant it did not take long for me to fall down the botanical name rabbit hole. I have always identified L. dentata as the so-called French lavenders and L. stoechas as the Spanish lavenders.  ‘Ghostly Princess’ was bred by PGA (Plant Growers Australia) Innovabred around 2013 and their informational material identifies it as a Lavandula pedunculata bred as a companion for their “The Princess” which apparently was a blockbuster introduction around 2003. They also refer to it as one of the French lavenders. Other sites label the plant Lavandula pedunculata ssp. pedunculata. After reading multiple site’s distinctions between lavender species and their common names (French, Spanish, etc.) I decided it was a global turf war this non-botanist really didn’t need to be involved in. I did learn that it is the ‘peduncles’ or rabbit ears on the top of the flower identify it as one of the French, Spanish or butterfly lavenders as opposed to an English lavender. Holy moly! 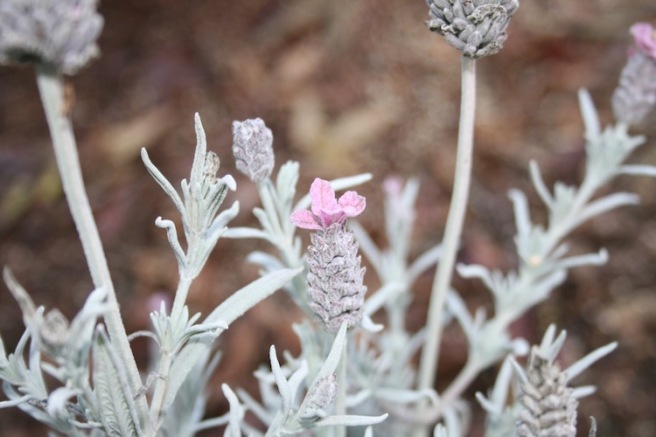 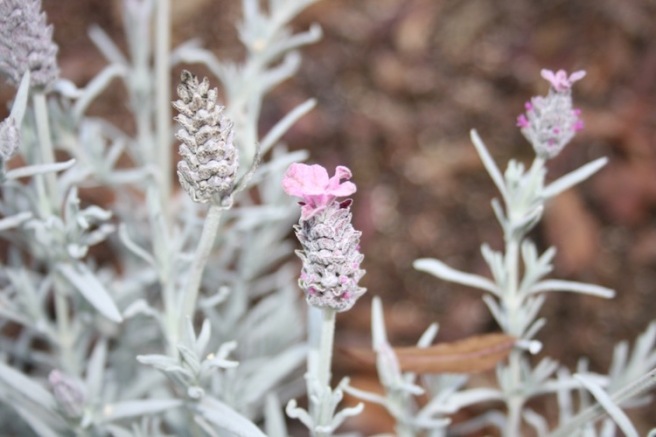 Bred for a prolonged flowering, a compact habit and cold hardiness the silvery foliage and pale pink petals are a stark contrast to the gray green/purple combo we see on many lavender varieties. Descriptions detail the pink bracts as having darker pink veins. Despite cold temps and a fair amount of rain my girl put on flowers the first week in December! Given a good start and time to develop a good root system through our moderate winter, I have high hopes for her royal highness.

One thought on “A ghostly princess…”