Our ultimate Southern California destination which allowed us the small side trip to the Rancho Santa Ana Botanic Garden in Claremont was an overnight stay at The Mission Inn to experience their Festival of Lights. Now in its 26th year, this privately produced public event started when Keepers of the Inn Duane and Kelly Roberts decorated the hotel with lights the first Christmas after its reopening to commemorate in Inn’s rebirth. This year’s festival includes over 5 million lights, more than 400 characters and beautiful decor inside and out. The 2017 25th anniversary switch-on ceremony drew 85,000 spectators. The display was voted “Best Public Lights Display” in 2014 and “Best Holiday Festival” in 2015 by the readers of USA Today.

The historic Mission Inn occupies an entire block in the heart of downtown Riverside, California. The oldest part of the Inn dates to 1902 when Frank Miller built a four story U-shaped hotel enclosing a large center courtyard. Over the next thirty years additional wings were added and the Inn became a destination for the wealthy and famous, many of whom stayed for months at a time. I’ll tell you a bit more about the hotel’s history in a second post when you can follow along with us as we take the docent led Historic Hotel tour.

If this looks like an event you’d like to take in next year my advice would be to arrive at the hotel well before dark to get your bearings. My husband had been to the hotel several times many years ago for business lunches and felt sure he knew the lay of the land. However, during the Festival, the normal valet pull-in area and front entrance of the Inn is cordoned off for the very orderly lines of hundreds of people waiting to walk through the light display. And there are masses of people everywhere on the surrounding streets, making negotiating the foot and vehicle traffic nerve wracking. Valet and self-parking for hotel guests is on the back side of the hotel with a short walk to enter on the Orange Street side of the Inn. 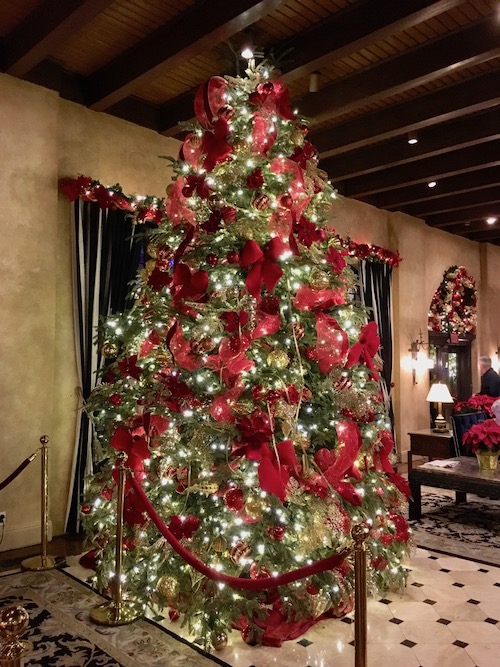 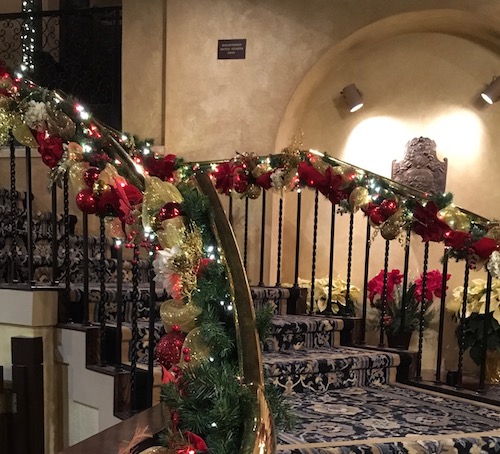 As we check in we are greeted by this beautiful Christmas tree. The lobby is sumptuously decorated and is full of groups, large and small, having a drink and a few appetizers, awaiting their dinner reservations and having their photos snapped in front of the tree by the tree’s personal elf. It is hard to say when I have seen so many folks dressed in red, green and sparkles recently. The Inn’s four restaurants and private room facilities are clearly favorites for holiday events.

Our home for the night was Room 101, a corner room in the oldest part of the hotel. The room was very large with three windows, 2 of which opened onto Mission Inn Avenue and the other overlooking Main Street which is a pedestrian paseo closed to vehicles. One story above the ground floor, we would be sleeping right on top of the Inn’s Museum. As I entered, the room felt a bit like being right on Bourbon Street in New Orleans at Mardi Gras. Even a grinch would have gotten into the Christmas spirit with the carols playing and the sounds of families and friends enjoying the festival just below. My own grinch’s fears about the room being too noisy to sleep were for naught–when we returned around 10 pm it was quiet and calm.

A perk of being a hotel guest is that you may wander as you please through the displays–no lines to wait in. We made a full circle (square?) around the Inn before we approached the main display at the front entrance. Please enjoy the lights while forgiving my abysmal night photography skills.

Despite the crowds and our fashionably late European dinner reservation hour, the evening was a lovely experience and the Mission Inn is clearly a holiday destination for area residents. FYI–we booked a single package which included our lovely room, a small credit toward dinner in one of the Inn’s restaurants and the docent led Historic Hotel tour the morning of our check out. Although I was actually born at March Air Force Base just outside of Riverside, I had not been there for decades and wasn’t really aware of the many other places of interest in its historic downtown. We certainly could have stayed another day or two and found many engaging sites to see. A+ on this overnight adventure!

One thought on “The Mission Inn’s Festival of Lights…”