Well…we’re in our new home across town. Just us, no furniture yet as the new flooring and painting is not quite complete. I’m beginning to feel right at home in the 6 square feet of accessible garage space and small covered back patio. I’ll give you the short version of our move!

A few days after my March post the movers arrived. Just to make things more exciting it poured down rain all day–mind you, there had not been a drop of rain in the Central Valley for over 6 months. It took two trips 15 miles across town to empty the house. The crew heroically slogged through my gardens loading up soaking wet, doubly heavy pots, my 8 foot potting bench and any number of other cumbersome, oddly shaped outdoor items. On the flip side their truck also slipped down my driveway and plowed over my neighbor of 11 years’ beautiful brick mailbox. 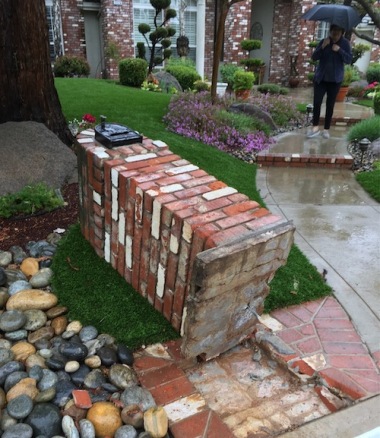 Fortunately no one was hurt and she recently sent me a picture of her newly built mailbox.

The power went out while my husband was across town with the movers unloading the first run and I was trapped inside my mostly empty home with the alarm screaming–unable to disarm it because our buyers had taken over the service the day before and their new codes were input prematurely. After a torturous 10 minutes, two moving boxes to stand on and a Phillips screwdriver borrowed from a neighbor I managed, under the direction of the alarm company via cell phone, to remove the battery and the transformer to silence it. I think I was 68 when the day started and 70  by the time it ended!

Just 2 days after our move Fresno put their shelter in place order in effect to stem the spread of the COVID-19 virus which has cost so many their lives and livelihoods in the past months. This effectively closed the doors of businesses deemed non-essential. Although we are no longer within the city limits, the city of Clovis and the State of California followed in just a couple of days time with their own orders. Fortunately, arrangements had already been made for some of our initial reno work, including flooring and painting, so those things have moved ahead slowly with us and workers alike keeping as segregated as possible.

We have very spotty cell service, no Internet or TV–a very strange way to live in times which are already so unsettling. Last Friday, after 25 days, we finally got our Internet connection!

So we have kept busy with small thing here and there…seeing where pots might be nestled into our tiny backyard and pulling out a few plants that I had deemed to be doomed even before we made our initial offer on the property.

The plant in the lower left corner is my Salvia ‘Big Swing’ from the old garden–one of a few things I pulled out of the garden and potted up before we put the house on the market. Below you see it a few days before I cut it back drastically to dig it–in full bloom for at least the last six months. I hope it likes its new home and am looking forward to the fabulous bloom display which is so attractive to hummers returning. 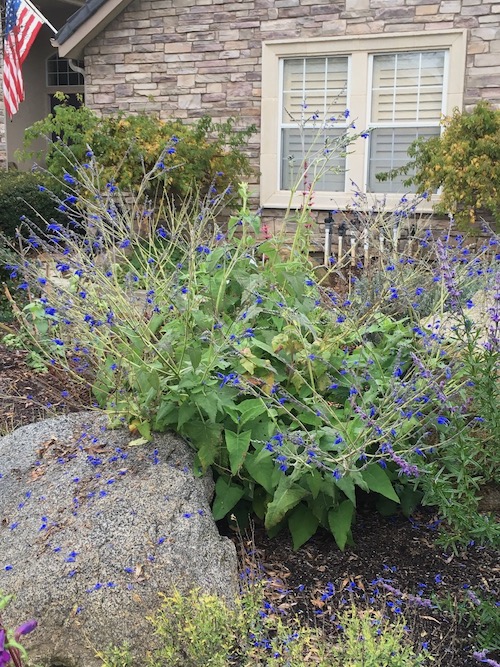 The potted Geranium maderense has also found a shady corner, though as we move toward summer I’m not sure it will not have to be moved again. For now it is happy as has just rewarded me with a few flowers–the first since I potted the seedling up last fall. 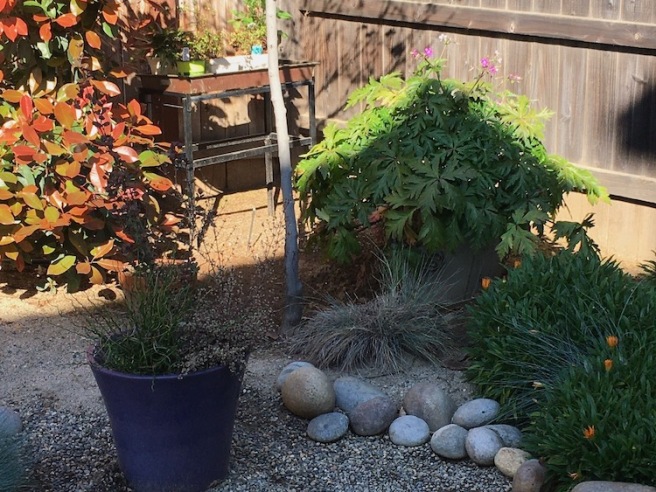 The new garden is less than half the overall size of the one we left, with much of it being in the front. We plan to build a stone wall to enclose the space between the two garages into a courtyard. This area faces northeast and will the coolest spot during the heat of summer. We will probably remove much of the lawn and replace it with less thirsty perennials and shrubs–an endeavor I feel as though I’ve gained some expertise in over the last few years!

The long eastern side yard faces the walking trail and conservation area and has only wrought iron fencing, affording us a lovely natural vista with a few houses in the distance. For some this might be a privacy concern but so far at least, we have enjoyed getting to know our neighbors as they pass by on their daily walks. With the children out of school and many parents working from home, the trail is getting a lot of use.

My purple potting bench has found a home tucked up against the fence and I’ve staged a few potted specimens from my old back patio around it. 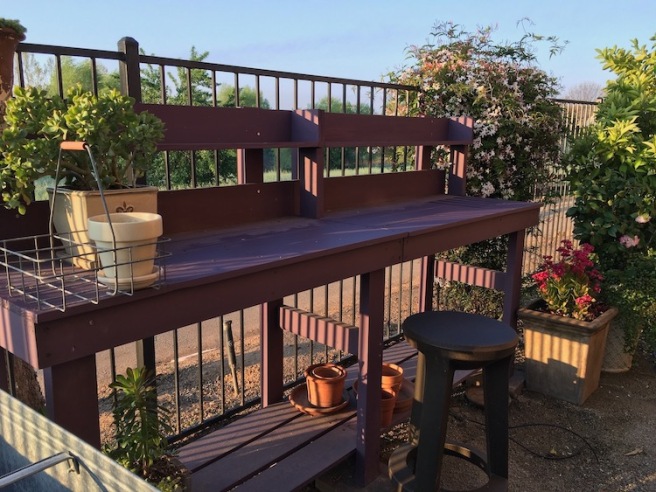 There is a young Valencia orange tree just to the south on the fence line whose fruit is beginning to ripen. This eastern exposure is also home to what we have been referring to as the zombie lemon–acerbically appropriate in this pandemic time. 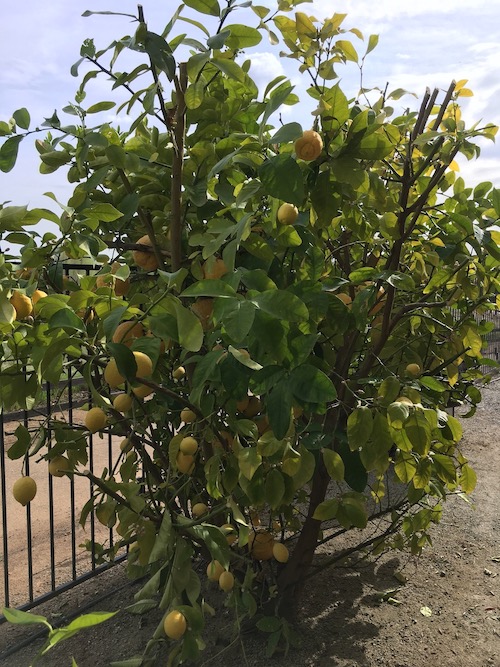 In self defense my husband cut it back by almost half its height and width two days after we arrived. It foliage and 2+ inch thornes made the sidewalk along the house impassable. 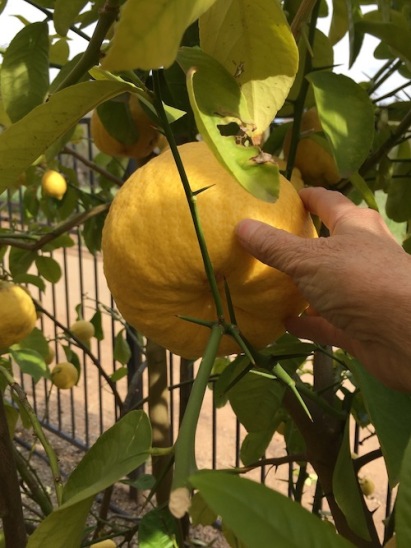 It has both normal sized lemons and these mutant ones that are larger than most grapefruit. A citrus grower friend who recently stopped by to bring us some blood oranges and tangerines from his ranch nearby identified it as a Lisbon lemon. He was also able to show Dave two large branches which had grown from below the graft were responsible for the freakishly large (and inedible) fruit and thorns. The “wilder” nature of the rootstock used for the graft had broken through and, never having been cut back, taken over the entire tree. His prescription: cut out the suckered growth, leaving only the normal grafted growth.  Post-surgery the poor thing is pretty lopsided but I’m keeping my fingers crossed as there is nothing like the smell of those blossoms in the spring!

2020 has been a unique year for us all so far. For many it will always be a year marked by anxiety, fear, economic hardship and the loss of loved ones. Let’s hope we all will have learned something about ourselves, our ability to persevere and our faith that life will go on even if forever changed.

“TO PLANT A GARDEN IS TO BELIEVE IN TOMORROW”       Audrey Hepburn