There are not enough weekends in April and May to be able to take in the many wonderful garden tours available to us!  I starting doing garden tours in earnest when I first moved to the South in the late 1990s.  The expansive gardens filled with wide swaths of flowering shrubs and bulbs were just so different from the beautiful but smaller and more detailed gardens commonly on tour in Southern California.  At one point I found myself trying to figure out how I could be in Georgia, South Carolina AND Alabama all on the same weekend.  They were all just too good to miss.  Adding to that space aged travel dilemma was my desire to hold on to my favorite California garden events too!

On one of my trips back to Southern California to attend the Mary Lou Heard Memorial Garden Tour I came face to face with the climbing rose which sparked my desire to have these beauties in my garden.  In this case it was a magnificent ‘Berries and Cream’ climber in the front yard of a small and tidy home in Fountain Valley.  There are few plants that can snarl garden tour foot traffic as surely as a climber massing over trelliswork 8 feet high and 10 feet wide and in full bloom.  Gardeners with yards large and small, from all walks of life, stop to chat about the beauty of a robust climbing rose.  As an aside to this climbing rose story let me encourage you to check out this wonderful tour which is held yearly, usually on the first weekend in May, and was started in memory of the owner of an iconic cottage garden nursery and shop in Huntington Beach, CA.  The tour encompasses 30+ gardens across Orange County and the funds raised from tour-goer’s donations is earmarked for the Sheepfold, a shelter for women in crisis and children.  See their website heardsgardentour.com for the details of this year’s event.

So roses, climbing or not, were a challenge for me in humid Central Georgia.  My few attempts were less than successful in a land where black spot and other fungal diseases reign supreme.  Returning to hot, dry Central California opened new opportunities to check “climbing rose” off my garden bucket list.  Roses are much beloved in my city and many varieties are available starting in January.  Roses can be seen in their glory from March through November.  We are a bit challenged by our often mild winters and you have to force yourself out into your garden in late November or early December to cut off perfectly good flowers and strip still green foliage to force your plants into dormancy to prepare them for full on pruning in late January.

Having solved the humidity/disease challenge by moving 3000 miles west I now had a more formidable challenge to surmount.  By their nature climbing roses need structure–trellis work, a pergola, fences to scramble on to mention a few possiblities.  It is sort of a “if you build it, they will grow” kind of thing!  My husband is very supportive of most of my garden dreams and plans until they involve construction or worse yet–letting something grow up the side of the house or attached to a fence.  This probably results from an ill fated episode in our first garden together when I planted creeping fig and encouraged it to grow up the side of the house, resulting in a close relationship with the gentlemen who you hire to re-spray the stucco and pay by the square foot.

The death of a large Photinia fraseri on our west fence line presented a wonderful opportunity.  My husband cut back all the small branches, leaving the trunk and larger branch structure in place and I went to my local rose gurus, Gazebo Gardens, to purchase my first climbing rose.  Notice that I did not say that I researched varieties, lengths of canes, blah, blah, blah.  Just went right out and bought one I liked—a floribunda climber named ‘Fourth of July’.  Had I done the research we might have left even the small branch structure intact on my tree trunk trellis as this magnificent rose’s climbing canes can surpass 12′!

‘Fourth of July’ is now entering its 4th bloom season and it requires me to stand on the top step of an 8 foot ladder to do the pruning and cleanup work in January. What you are seeing below is just the top or head of the upward trained climbing canes—there is another 5 feet below where the canes are tied to the dead tree trunk!

Good thing I started with a robust and very forgiving climber!  I have since added two more selections to my garden and learned that there is way more nuance and sophistication to these gems than I realized.  My next selection was destined for a more traditional metal trellis easily seen from our back patio.  I now realized there could be much variation in the natural growing length of the canes by variety and specifically chose one whose canes were in the 8 foot range so it would not overwhelm my support.  This sparkling lovely is called ‘Morning Magic’ and comes from the breeders who gave us the Knockout Roses.  It is a delightful shell pink and almost seems to shimmer in the early morning sun. 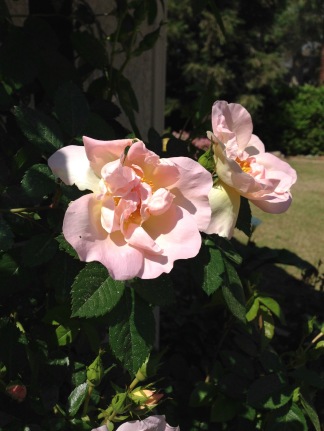 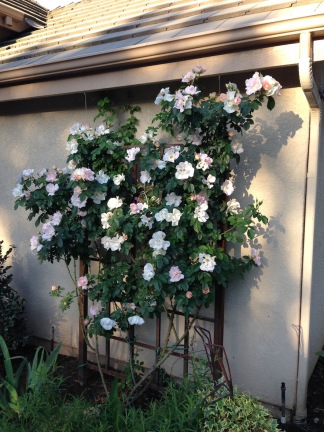 My rose expert friends tell me I need a good bit of corrective pruning in my attempts to cover my framework well but I am not unhappy with my efforts so far—this is the 3rd year in the ground for this magical rose.

The last climber I bring you is ‘Eden’.  We built the pavilion you see in the photo under the blog title in 2011.  It provides us with an additional shady spot for entertaining and we often eat in the pavilion on summer evenings. Feeling it needed some ‘softening’  we added the painted trellis work in the fall of 2013. The trellis has 6 uprights, four of which are planted with ‘Eden’.  Fearing a rose might overwhelm the space which functions as the main entrance those two uprights are planted with Lavender Trumpet vine—-this vine is known to be a slow starter but it has definitely underwhelmed me.  Moving the rose canes toward the top horizontal crosspieces has been quite challenging with lots of tying and tweaking.  At the beginning of its 3rd year I have only one cane up on the horizontal  and I have found identifying the climbing canes to be more than problematic for my novice pruning skills.  I will persevere in hopes of seeing a bride and groom standing under a glorious profusion of roses in a couple of more years!! Are you reading this, Joshua?

Go, ahead! Become a social climber.  You will be rewarded with almost endless beauty.  Happy planting from my yard to yours!