Having a weekend free of commitments and significantly hotter days forecasted for next week I set about to do the first deadheading of a couple of groups of roses.  No plan to shop, eat out or even take a road trip—no better way to spend a weekend than deadheading roses.  Is that a commentary on my life, or what?

When we bought our home in 2008 it was 8 years old and most of garden beds appeared to have the original landscaping from 2000, the year the house was built.  Knowing I would change a lot of it I spent our first 6 months surveying what we had and how it performed.  I probably should have taken a year but the 6 months put me into March and how could I resist a new gardening year?  Clear winners of the “what stays and what goes” conversation were several groupings of pink and red miniature roses.  Their companions, orange in color, lost the toss.  Doing some research on these little beauties at a local nursery, Gazebo Gardens,  they were identified as Sunblaze miniatures, Sunblaze Pink and Sunblaze Red from Star Roses.  I also learned that the Sunblaze Pink was no longer being grown, having been replace by a new and apparently improved pink called Sunblaze Sweet.  After a short but intense period of mourning at not being able to obtain additional plants identical to my pink miniatures I simply rearranged what I had and moved forward.  I have the pink and red alternating in areas of 2 beds and they have performed magnificently for the last 7 years.

I have developed a deadheading regimen for the Sunblaze Pink roses that gives me 6 or more blooming periods, each lasting about 8 weeks.  With a little variation here and there for weather (hot) and water (very little) they respond with clockwork precision.  A little disclaimer here—I am not a rosarian or in any way educated about roses, except what I have read and gleaned from others.  I was a Master Gardener when I lived in Georgia but as roses are very challenging in that humidity and fungus ridden garden environment we got very few calls needing help with them.  I can only share what has worked for me, in my garden with these particular roses.

In my Central Valley of California we routinely strip the flowers and foliage off our roses mid November in an attempt to force them into dormancy and get them ready for annual pruning.  I prune all my roses about mid January. In many places this would be considered very early but if we have a mild winter and an early spring you could be looking at new growth on plants you have not even gotten the clippers to yet.  The Sunblaze Pink responds to this hard prune by popping out new growth within a few weeks depending on the weather.  Dependably I have buds, and then the first open flowers, by the third week in February. Below you’ll see one of the beds photographed about mid March. 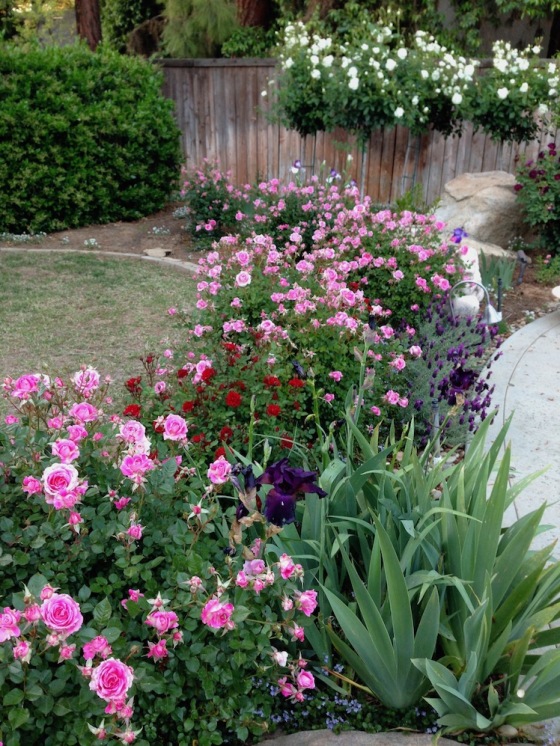 You can see here that the Sunblaze Red are naturally smaller than the Sunblaze Pink but they both look lovely in combination with the dark purple iris and the smaller lavender. In the next photo you can see the roses have reached their bloom cycle peak.  This photo was taken on April 7th. 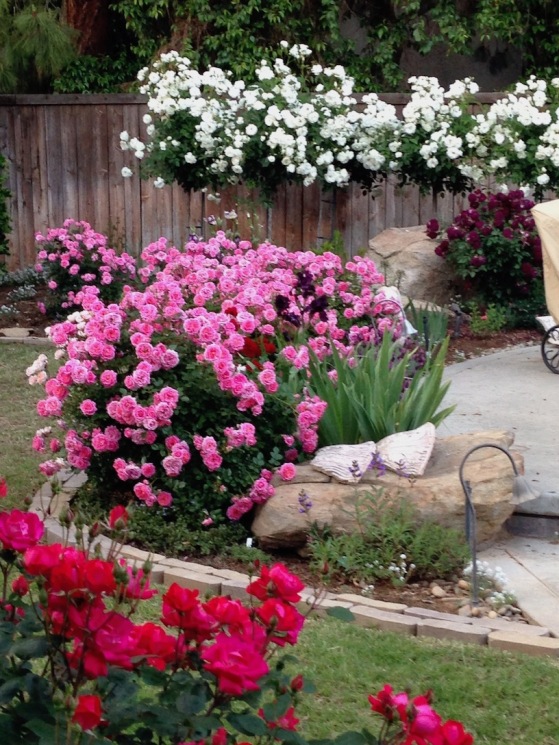 I tend to deadhead quite aggressively and, according to some of my gardening gals, a bit too early in the cycle.  I find that if I wait til all the roses on any given plant are spent I’ll be looking at cutting back around new growth or life will just get in the way and things won’t get deadheaded at all. The photo below was taken this morning and it a good representation of the point at which I go looking for my clippers—noting that I am about 7 weeks past the emergence of the spring growth. 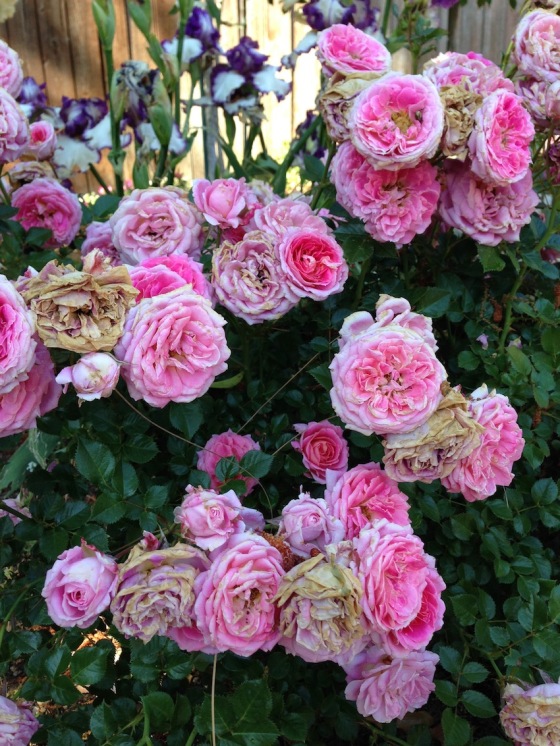 I have spent flowers, flowers in their prime and even some buds.  They all have to go!!  It takes a great leap of faith to cut off perfectly good flowers but you are just that much closer to the next bloom cycle. To cut these to bring inside for a vases or a bouquet you would have to pick through all the dead ones to get anything decent anyway.  Also lessening the flower murder stress is that our first bloom cycle is in prime time for the hoplia beetle.  These miserable critters use the blooms on white and light colored flowers as their own personal love shacks.  They emerged from the soil about mid March, fly up to and mate in the flowers all the while munching on the flower’s petals to keep their strength up.  Then the female lays her eggs in the soil where they overwinter as larvae.  If you look closely in the above picture’s upper right you can see one of these bugs sticking out–they are often mistaken for Japanese Beetles.  They are most effectively controlled by handpicking and squashing–yuck.  I have enough yuck in my yard stomping snails–do I really need this?  The good news is that they will be gone by the second bloom cycle!

So I have spent about 3 hours with my clippers on a total of 8 Sunblaze Pink roses.  I think this is a good trade for the promise of the next bloom cycle. Typically these bushes rest for about 2 weeks and then start pushing out new growth.  In 6 weeks I will have a clean new flush of blooms to enjoy for a couple of months.  Then I’ll just do it all over again! By the way, the 5 Iceberg tree roses you see in the background of these pictures got their first trim back today also and will follow much the same cycle as the Sunblaze Pink. Interestingly enough, the Sunblaze Red are exceptional ‘self cleaners’. Their flowers dry and drop very cleanly on their own, they will rest then come back into bloom without any human intervention almost on the same schedule as their neighbors.  Isn’t nature wonderful? 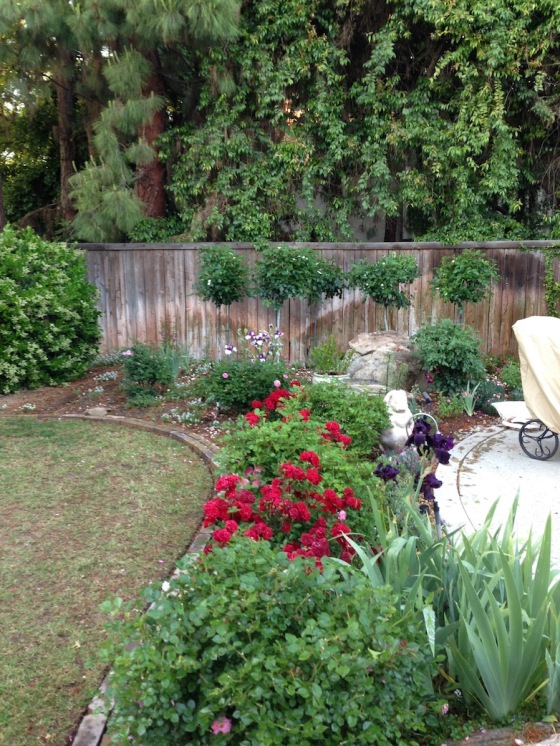 So here you can see the fruits of today’s labor.  The second bed containing these same roses looks much the same.  Put your timers on and I’ll give you a heads up when we have flowers again.