I admit to spending a good bit of time talking about hardy geraniums over the last couple of months in my quest to make you aware what really is a geranium, as opposed to what we here in the US call geraniums which botanically are called pelargonium.  That effort is born not in my desire to bash the pelargonium world but to make more gardeners aware of the magical world of the ‘other geranium.’ Feeling that the pelargonium may need a little love from me, let me tell you a bit about them.

Pelargoniums are woody perennials, most native to South Africa, which can endure light cold but not hard frost.  The three most commonly grown species in the US are the P. x domesticum (Martha Washington), P. x hortorum (common) and P. peltatum (ivy leafed).  All of these are garden center staples. Both the ivy leafed and common pelargoniums have fleshy, succulent like leaves and are easily propagated from cuttings.  In the past few decades many species of scented geraniums have also become increasingly popular. The common names of these will usually refer to the fragrance of their leaves and most in this category are good for bed edging, in herb gardens and in some culinary/medicinal uses.

Beyond these easily recognizable groups there are many more pelargoniums to be coveted.  One of my favorites is pelargonium sidoides.  Several years ago on the Mary Lou Heard Memorial Garden Tour in Orange County, my gardening girl Judi and I started our day at a garden farther north than we had generally ventured in past years.  To put this into perspective, this tour can often have 40+ gardens open and you could travel 90 miles from the most northern point to the most southern.  Given that we prefer to see as many gardens as possible rather than spend our day driving we would laboriously plot our route to get as many gardens per mile and thus never really get to the ‘outer limits.’

The description of this garden enticed us with the promise of a collection of pelargoniums which had been amassed by the homeowner over 30 years and the opportunity to purchase plants grown from his cuttings. And we were off!! We arrived at a pretty nondescript home surrounded by others just as much so until we got out of the car and a little closer–the front yard was overflowing with pelargoniums of all shapes and sizes, both planted in the ground and in pots placed strategically to let their flowers peek up behind another plant’s foliage.  The small back yard was dominated by a large greenhouse crammed with more specimens and a couple of smaller plastic sheathed growing areas.  The owner circulated among his guests answering questions and pointing out various plants.  Truly these plants were his passion and we caught a bit of the fire from him.  One of the 4″ pots I purchased from him was a fairy garden worthy stunner called pelargonium sidoides: 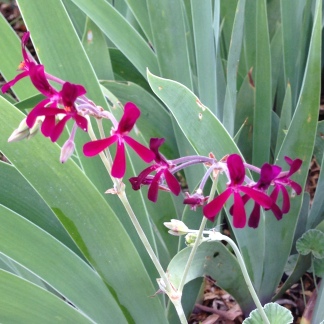 The dainty burgundy flowers born on slender, branching, trailing stems wave with the breeze.  They are held high over a dense mound of small, silvery gray, heart shaped leaves.  Although I have just two plants (the second being a cutting from the original purchase) I think this sweet thing would make a good small scale ground cover in areas receiving no hard frost.  Once established it can take full sun with moderate water. It blooms continuously from early spring (when the above photos were taken) to the coming of cold days in November or December.  Mine are planted perhaps a bit too close to the front sidewalk and tend to wander onto it as you can see below in the photo taken yesterday–doesn’t bother me until visitors have to actually step over it and then I’ll pinch it back a bit. I have come to understand that this pelargonium is not as uncommon as I initially assumed and I have seen it a few times since in local garden centers.  To my knowledge it does not have a common name but I am going to call it Burgundy Fairy Flower!