Just to set the record straight…there was no queue. I just could not resist the fun title. On the topic of titles let’s this garden’s right straight off. My visit was to Royal Botanic Gardens, Kew. Dave left early for his meeting venue and I followed shortly heading to the London Underground. Kew is quite far out from the Central London area, requiring a line change and a total travel time of about 45 minutes. The last few stops are above ground with simple station platforms reminiscent of a bygone era. When you alight at Kew Station you have clearly left the hustle and bustle of the city and entered a quaint English village  like those we have all seen on PBS and BBC for years. It was very much a sigh of relief for me after several days on the run, trying to figure out how to get where we wanted to go and not get run over by a bus or taxi in the process!

A brief walk takes me to the Victoria Gate of this world class botanic garden. This 326 acre park offers more attractions and highlights than anyone can cover in a single day. After consulting with a docent I decide to buy a ticket for the Kew Explorer, a hop-on, hop-off land train which circles the garden and offers me a solution for seeing some of the more outlying areas without my legs falling off and sort of get a peek at everything before I commit my brief time here to any specific part of the garden.

I was able to get a sense of the Woodland Glade, Holly Walk, Berberis (Barberry) Dell, Redwood Grove, Conservation Area, Oak Collection and Rhododendron Dell while on the train and did not feel the need to explore them on foot. These are all very large scale plantings and were better viewed from a distance, freeing up more time to focus on other garden areas.

I hopped off to spend a bit of time at the Japanese Gateway and Pagoda. The Pagoda, one of many follies in the garden, was completed in 1762 at the height of the 18th century craze for Chinoiserie. The ten story octagonal structure has lost its elaborate detail after so many years and is undergoing a two year restoration project. Its neighbor, the Gateway of the Imperial Messenger, is a 4/5th replica of the Gate of Nishi Hongan-ji in Kyoto, Japan. The gate was created for the Japanese-British Exhibition held in London in 1910, then dismantled and reconstructed near the Pagoda in 1911. A small Garden of Peace offers an area of tranquil respite and completes the Japanese landscape.

My next stop was Kew Palace to see the Queen’s Garden and the Royal Kitchens. The Queen’s Garden sits between the palace and the banks of the River Thames. However they are fully walled and you do not even recognize that the river is there until you view the formal garden from the Palace’s upstairs windows. The house started its life as the home of a Flemish merchant. It was purchased by King George II for Queen Caroline and their children in the late 1700s and will always be associated with the illness of their son, George III. The Kitchen Gardens bear witness to the never-ending search for a cure for his ‘madness’ with all manner of medicinal plants being grown in addition to the edibles for family meals. 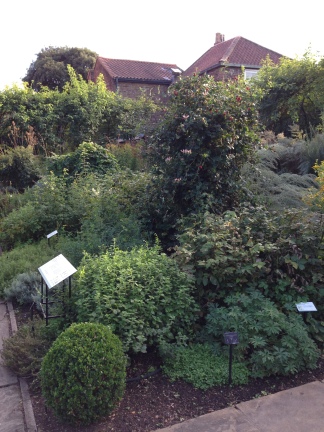 Leafy allees lead to the Kitchen Gardens, also formally laid out with a center axis. The garden’s medicinal plants are well labeled, including information about the ills for which each plant was believed to have curative powers. The source of George’s supposed madness remains elusive.

I had signed up for a 2 pm tour of the newly completed Great Broad Walk Borders and had just enough time for one more hop-off the Explorer, this time at another new must-see at Kew-The Hive. Artist Wolfgang Buttress was commissioned by the UK Government to create this multi-sensory installation which formed the centerpiece of the UK Pavilion at the 2015 Milan Expo. The structure rises to almost 65 ft. and highlights the importance of pollinators to the world’s future food security. The Hive allows visitors to step inside the life of bees in hopes of inspiring us all to join in the battle to save the bees.

The research of Dr. Martin Bencsik (Nottingham-Trent University) on bee vibration and communication patterns inspired the artist to create the structure which stands in stark contrast to the many centuries-old buildings at Kew. You enter The Hive from a circular path set into a wildflower meadow. The installation is made from thousands of pieces of aluminum which create a lattice effect.  It is fitted with 1,000 LED lights that glow and fade as a unique soundtrack hums and buzzes around you. The lights are in fact responding to the real-time activity of bees in a beehive located near the Orangery in another part of the park. Vibration sensors called accelerometers have been place within the beehive The sound and light intensity within The Hive changes as the energy levels in the real beehive ebb and flow.  It is a surreal experience to stand inside the hive and experience the life and energy of bees. The Hive’s honeycomb structure weighs 40 tons yet seems light as air. 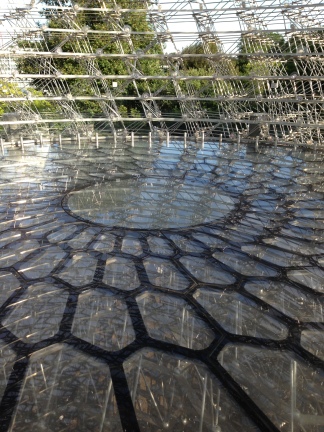 Floor of The Hive 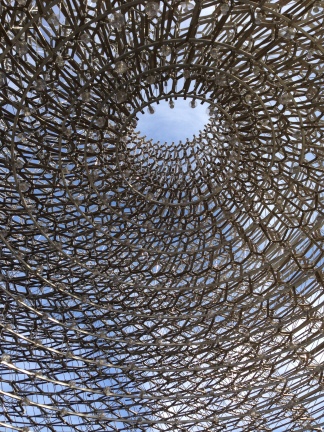 The view to the sky

To stand inside with the floor almost disappearing below you and the hive rising high and open to the sky above is an experience not to be missed. To add to the experience, bone conductors have been installed in the space beneath The Hive. These convert the sound into vibrations which, when touched with the wood stick provided, travel directly to your skull, and represent the secrets of bee communication through vibrations.

Kew’s Year of the Bee offers many Hive activities and educational opportunities to learn about Britain’s bees and the plight of bees worldwide, how to be bee friendly, the power of pollination and creating wildflower meadows.  There has even been a special opportunity to experience The Hive at dusk–so sorry I missed that!

NEXT UP: KEW #2 The Great Broad Walk Borders, a little Kew history and MORE!