Today’s itinerary included a tour of three Cotswold villages followed by Anne Hathaway’s Cottage and the Birthplace of William Shakespeare, both in Stratford-upon-Avon. If the post seems to be getting too long I’ll do a separate post for Anne and Bill.

Traveling northwest of London into the countryside we immediately encounter thick, wet fog. David, our tour guide tells us this is not uncommon and that the only thing about English weather that you can count on is that you can’t count on it at all. David uses this time to give us a little history of the region we will see. The Cotswolds is a region of rolling hills and villages, often called the most picturesque in England. It encompasses 6 counties with numerous villages and hamlets filled with stone houses (many with stone roofs also) built from the locally quarried white limestone. The stone has turned a honey gold with age and the cottages looked as though they have strayed into the 21st century from another era.

The word ‘cotswold’ comes from two medieval words: ‘cot’ meaning a sheep enclosure and ‘wold’ meaning hill. During the 1500s wool production was the backbone of the economy. The British Isles has more than 50 types of sheep broadly divided into mountain sheep and lowland sheep. The mountain sheep are found in Scotland, Ireland and Wales and tend to have good lean meat but poor quality wool as they are athletically built for mountain life but tend to get pretty scruffed up in the process.  David tells us that the lowland sheep found in England, having no mountains to climb, are downright lazy and thus produce fatty poorer quality meat.  Their coats do benefit from the laid back lifestyle however and in the 1100s-1500s they produced the finest wool in Europe.  The wool was shorn and sent to Flanders where it was woven into cloth. Today the economy of this region is based on agriculture with 80% of the land being farmland. Crops include wheat, barley and rapeseed from which canola oil is produced.

Our first stop is the village of Burford known as the ‘Gateway to the Cotswolds’. Its name is derived from the Old English ‘Burh’ meaning a group of houses and ‘ford’ meaning the ability to cross a river, in this case the River Windrush, without a bridge. Burford has  about 2,000 residents and only one main road. Three eras of cottages can be seen here: Tudor from the 1400-1500s, identified by their black painted oak trusswork and white painted plaster; those built after the Tudor period but before 1700 are identified by windows which are set on the same plane as the walls and those built after 1700 have windows set back 4-5″ from the walls. I was a little disappointed to see very few gardens here and David affirmed that this area is not known for its gardens. Here’s what we saw on Buford’s main street! 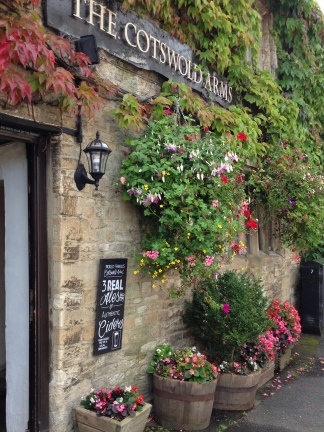 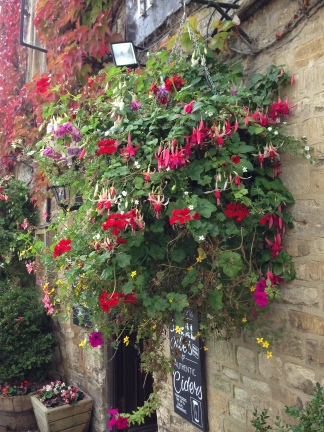 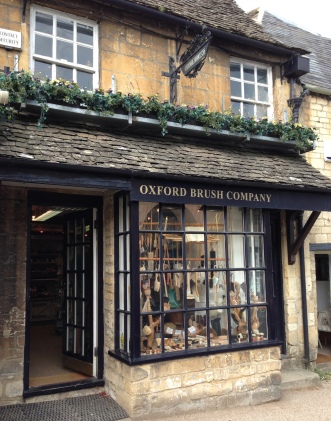 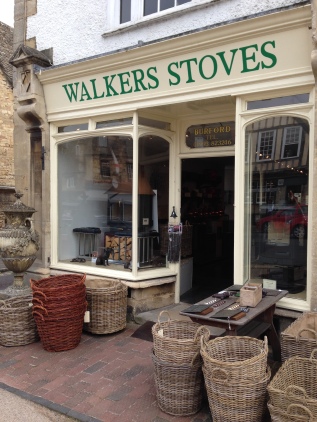 The collection of finely made wooden handled brushes in this shop’s window made me want to buy one of every kind–they were works of art masquerading as cleaning tools! 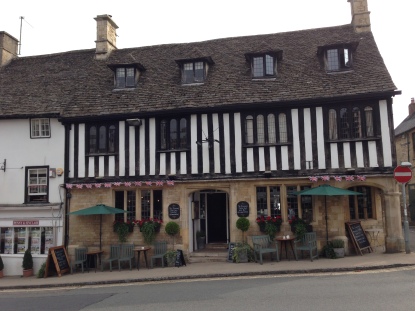 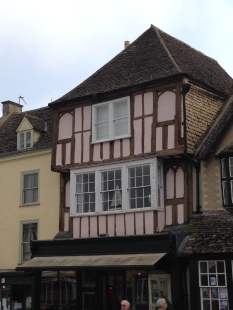 Here’s that Tudor architecture David told us about–notice we are on a hill. 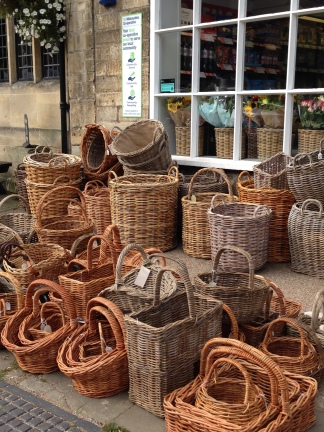 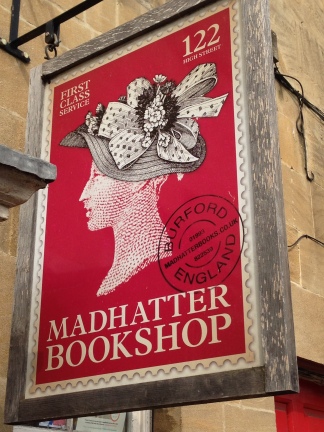 I still have several handled baskets like these from the time my parents lived in Wembley in the early 1950s. 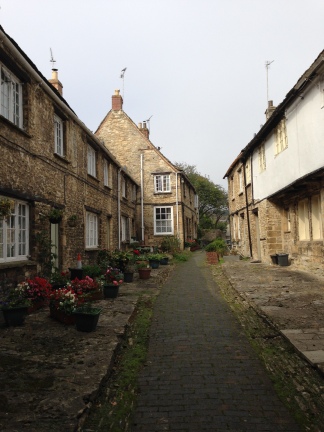 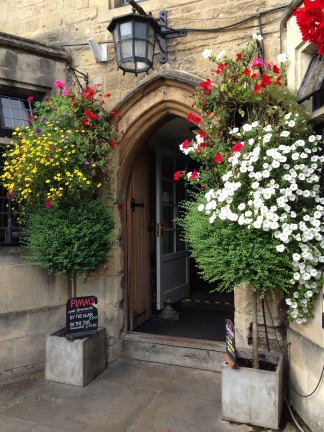 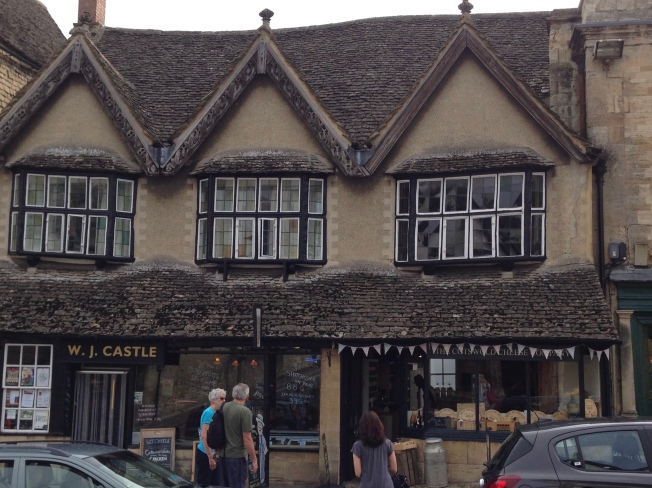 Our bus was parked in front of the Burford Priory in a car park area that has existed for many years off the main road. Our guide relayed that the priory property had been purchased as a country house by Elizabeth Murdoch (daughter of Rupert Murdoch) and she has been attempting since then to have the bus parking removed! Apparently walls don’t make good neighbors…

Onward to our next Cotswold stop–the village of Bibury which lies on both banks of the River Coln, a Thames tributary. This village dates to 1130 and is the scene of the accidental discovery of a Roman villa in 1880. The village has only about 40 homes and businesses, two of which are hotels. 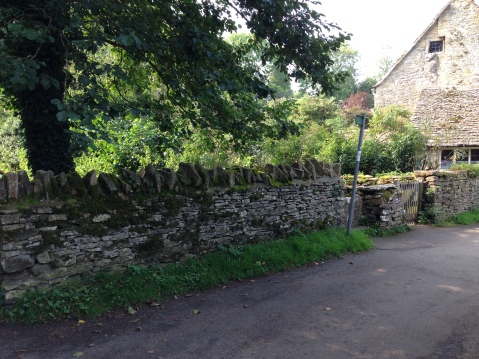 Dry stacked stone walls like the above are found all over the Cotswold region and there are many beautiful examples in Bibury. 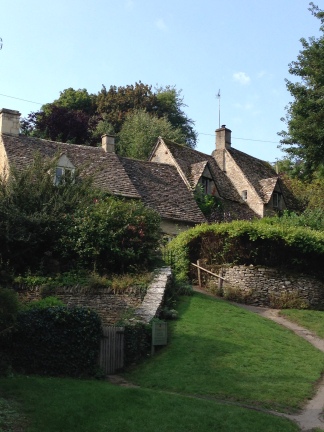 The picturesque Arlington Row cottages above were built in 1380 as a monastic wool store.  In the 17th century they were converted into a row of cottages for weavers producing cloth for the Arlington Mill on the River Coln. These cottages are depicted on the inside cover of all UK passports and are a nationally notable architectural conservation area.

The Arlington Mill still stands on the river but is now a private residence. 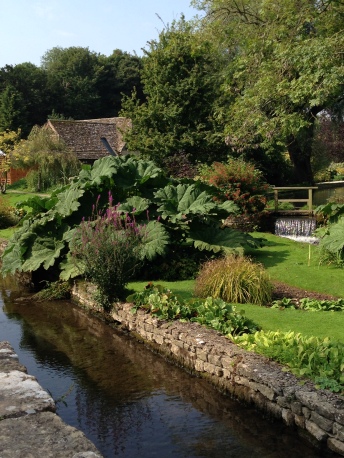 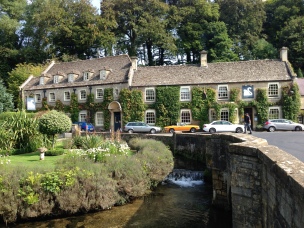 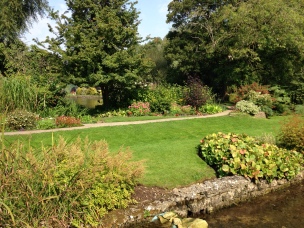 The Bibury Trout Farm has lovely gardens, much of which are right along the river to be enjoyed by all. The Swan Hotel also sits on the shallow river’s bank allowing visitors to stroll anywhere in the village within 5 minutes or so. Bibury is perhaps the most beautiful village I have seen in all my European travels.

After a rich ice cream cone from a local vendor we are back aboard our coach heading down NARROW country roads toward our last Cotswold District stop–a village called Bourton-on-the-Water. This village’s name comes from the Saxon ‘burgh’ meaning fort and ‘ton’ meaning village. Evidence has been found of an earlier Bronze Age settlement which may account for the name. The water in this case being the River Windrush. This village seems almost a metropolis compared to the previous two! Burton-on-the-Water is the civil parish for the county of Gloucestershire and has about 3,200 residents. This charming village is known for High Street. Long wide greens flank the shallow River Windrush which lies right next to the street in the heart of the village with businesses and shops on both sides. Families with toddlers and uniformed school children play and rest on these lawns with a few brave little ones wading in the river. Our guide David told us that on the hottest days residents are known to play football in the river which is now no more than ankle high. Clearly a vacation destination for Brits and foreigners alike there are many guest cottages and small restaurants with outdoor seating. We have time to wander on our off this main thoroughfare and it is just as charming at every turn.  Take a look! 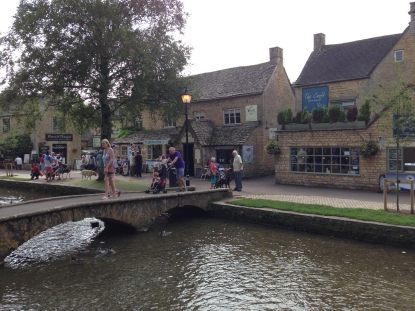 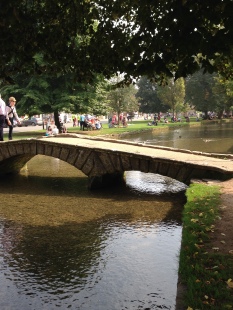 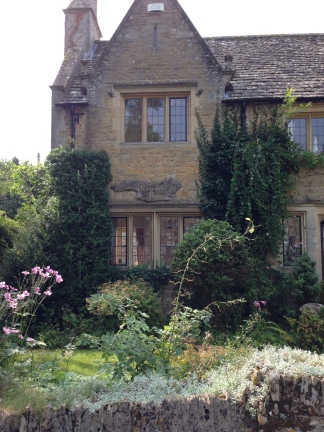 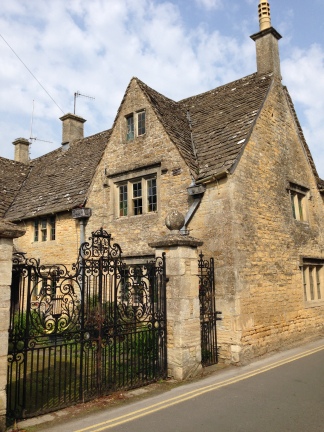 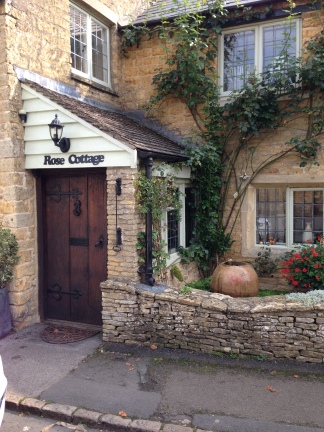 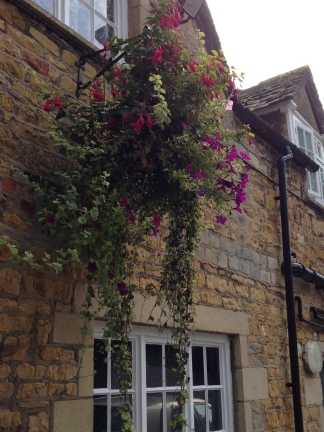 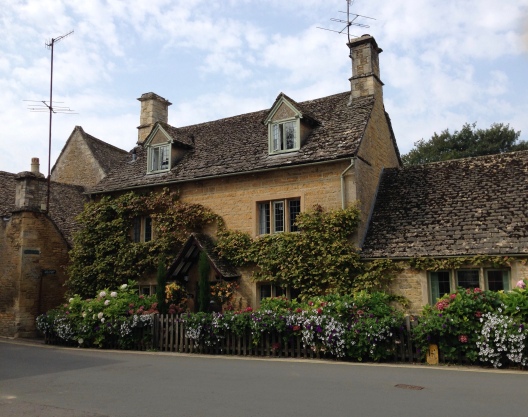 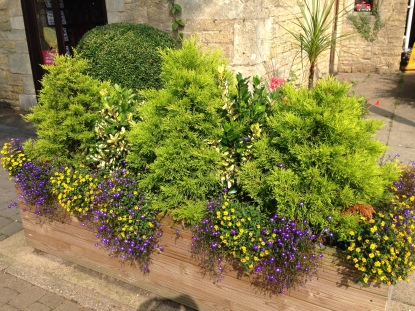 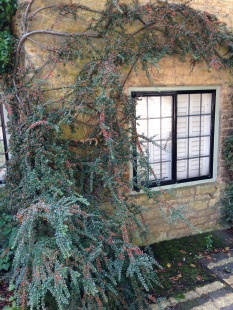 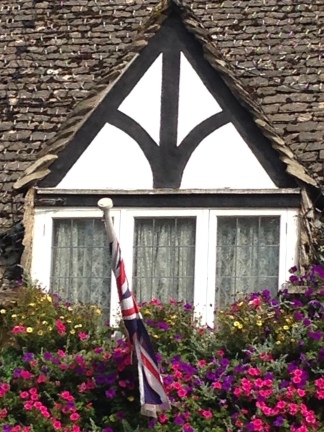 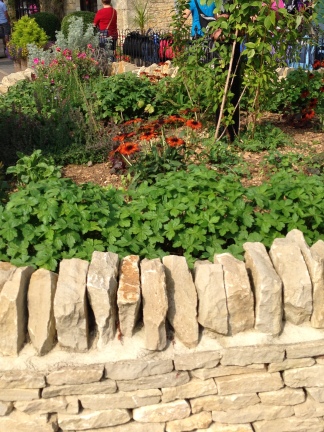 There is no shortage of honey colored stone in Bourton-on-the-Water! Even the new additions needed such as the dry stacked wall leading away from the village center to an unseen parking area has been made to blend in with the ancient structures. Narrow lanes and cottages small and large beckon you to stay awhile–I could certainly spend a few idyllic weeks in any of these three Cotswold villages with a bag full of books or a basket of appliqué and never get tired of the beautiful views, cool clean air and very hospitable townspeople.

I will leave Mr. and Mrs. Shakespeare for a short post tomorrow. You are free to go about your day as usual while planning your Cotswolds adventure in your mind’s eye…