There are few genera of plants whose ‘thug’ species are reviled by the ornamental gardening world to the extent that their far less common but far more polite cousins are virtually overlooked. Every gardener, even ones who just mow their lawns and take a glance at their beds and borders now and then, knows the highly invasive and almost impossible to eradicate weed called oxalis. Oxalis corniculata is also referred to as  yellow oxalis, yellow wood sorrel or possibly four letter words of your choice; truly for most of us just the word oxalis says it all. This perennial menace thrives in sun and shade all over the western states (and beyond, I’m sure!) Its small 5 petaled yellow blooms are followed by elongated seed pods which can propel seeds up to 6 feet. Once the seeds germinate, forming a shallow taproot, a knitted network of roots quickly develops and it is on the move. For every one you hand pull, hundreds of seeds are dispersed in the process. Along with its partner in crime–spotted spurge–it is one of few weeds which merit herbicides especially made for its control.

Several years ago we started to see highly decorative oxalis species, mostly from South Africa and Mexico, more prominently in the retail trade. The shamrock plants sold in March for St. Patrick’s Day and the so-called Candy Cane plant seen around Christmas time are examples of oxalis which have found a niche on the plant scene and are primarily left in their pots probably due to unease about invasiveness. I have more than once pulled myself away from the gorgeous maroon foliage of Oxalis triangularis not quite believing the claim that it remains quite compact.

And so…it was truly a leap of faith for me to purchase a little 3″ pot of Oxalis hirta a few  years ago on a plant shopping trip to Southern California. Even having read its Sunset Western Garden Book description which painted a picture of restraint my little one spent its first full year in a pot! Oxalis hirta, native to South Africa, emerges in the late fall from small bulbs. Short stalks shoot up and feathery green leaves follow. Literature describes these stalks as about a foot tall but mine never top 6-8″. A bright rose pink flower eventually tops each stalk. 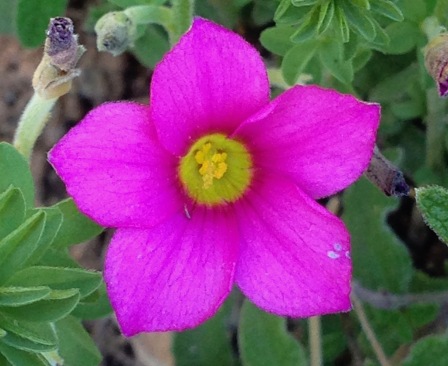 Gaining a small measure of confidence that this pretty baby was not the kudzu of the west in disguise, I transplanted several handful of the diminutive bulbs into beds here and there. I passed on a few to a friend who, being no gardening fool, raised her eyebrows when I told her they were from the genus oxalis and promptly planted them in a pot on her patio for safety’s sake.

Oxalis hirta will continue flowering until heat sets in again and then the colony goes dormant for the summer.  This makes it a perfect little bulb to have planted among other plants which die back in the winter. They are a fun surprise in the garden when all else is shutting down for the season. Although the bulbs do naturalize, the colonies are very tight. Below you see the first few coming up on the left in an area covered through the summer with Geranium h. ‘Tiny Monster’. A second colony (seen on the right) will eventually be covered by low Cistus (Rockrose) that was planted to mask the bare legs of the background roses. I will spade these out in 2017 as they start their summer’s rest and move them forward in the bed. 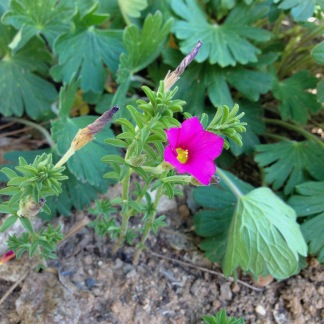 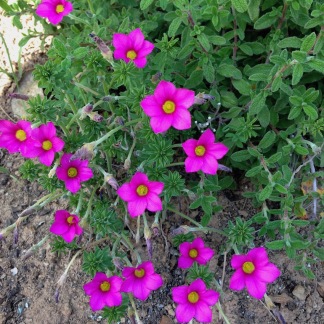 The whorled flower buds seen below in the side view of this colony are your horticultural clue to this plant’s membership in the oxalis family. 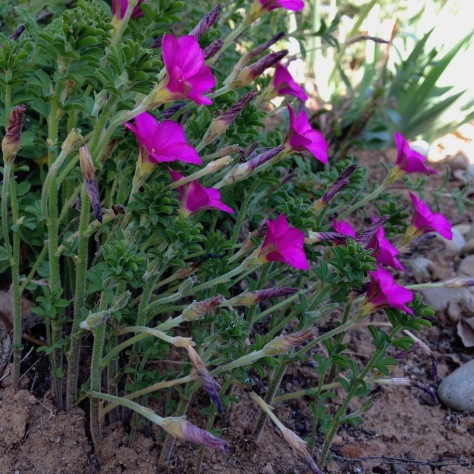 I see this little gem as a plant in need of a PR professional and a Facebook page. At the very least it needs a common name which eventually might allow folks to forget that it is an oxalis and give it a chance!