Filoli  is a fine example of an early 20th century country estate located in Woodside, about 30 miles south of San Francisco. The 654 acre estate is a National Trust for Historic Preservation site which was opened to the public in 1976 and features a 54,000 square foot home, more than 16,000 square feet of formal gardens, a six acre orchard and numerous marvelous open meadow and woodland spaces. They boast extensive educational offerings in horticulture, nature education, botanical art, the decorative arts, flower arranging and much more plus lecture series events and opportunities for nature hikes. Filoli is in its final year of a three year Centennial Celebration and has declared 2017 its Year of the Garden.

For the last several years they have offered an eight month horticultural certificate program called A Year in the Garden. Long on my bucket list, I declared 2017 MY year in this marvelous garden. This informative series of classes covers a broad range of topics from basic botany to water management and garden design. A huge perk for its students is that it is taught by Mimi Clarke who was a full time Filoli staff gardener for over ten years. Mimi now maintain gardens for a number of private clients but has not lost her love of Filoli and has a wealth of knowledge of the gardens and its plant material gained over her many seasons of stewardship of the grounds and its plantings.

In future posts I’ll tell you more about the history of Filoli and share with you more photos of both the home and grounds. The day of the first class meeting arrived with dark skies and a steady drizzle of rain which made both the almost 4 hour journey from my home and photography in the garden challenging.

Clad in our boots and raincoats, our group of fourteen was met in the Visitor and Education Center to be escorted behind the scenes to our classroom in the Potting Shed located near the estate’s original greenhouses. And a very nice potting shed it was…

This lovely building was built in the last few years with funds donated by a generous Filoli benefactor and offered the perfect setting to begin our study, surrounded by the garden staff’s tools of their trade and with lovely views of both work in progress and the surrounding woodland.

Mimi Clarke gave us a short overview of the series and we all had the opportunity to introduce ourselves. Many of my fellow students characterized themselves as novice gardeners and their hopes for what they would gain from the class were as varied as their ages and hometowns. I think we’ll be a fun group and everyone will learn from each other’s experiences.  I was really excited to hear that most class days will have a nice balance of classroom work and hands on work in the garden or garden walks.

Our morning topic was part one of two lectures devoted to Basic Botany. No matter how many times I have heard these plant growth basics, I feel a little more empowered every time. So many of the decisions we make about how we choose, plant or prune individual  specimens should be based on basic knowledge of their root, stem and leaf structures and often, they are not. We just put them in the hole and hope for the best–often applying a one process fits all plants philosophy. We cut them back hoping to make them fit the size or shape we require without regard to their genetic disposition. We prune when it is convenient for us rather than the optimum time in the growth cycle of the plant. I can never hear these basics too often! I also appreciated Mimi’s concise explanation of botanic nomenclature and the importance of knowing your plants by their scientific names rather than their common or regional names. The printed material we received on botany basics and types of root, stem and leaf systems along with illustrations of leaf classifications is to the point and will be a good addition to my references.

After a quick lunch break we set out on our first garden exploration–the Landscape Tree and Shrub I.D. Walk.

As a quick diversion we first spent a few minutes learning about the literally hundreds (maybe thousands?) of potted up daffodils, tulips and foxgloves lined neatly in the yard area outside our potting shed classroom. 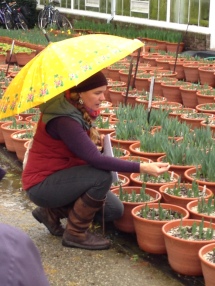 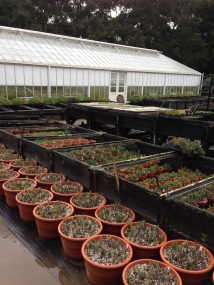 We learned that these pots are used not only for color in and around the patio and walkway areas of the garden but also placed in the beds to fill in gaps. Once each pot’s peak bloom has passed it is replaced with a new one whose bulbs were set in a bit later, thus extending the bloom season as long as possible. Spent daffodil bulbs are then planted in the outlying areas of the garden to provide color the next year. Spent tulip bulbs are composted as there is not enough winter chill to have them bloom from year to year in the ground.

With umbrellas up and a great handout relieving us from too much note taking Mimi led us through various parts of the property stopping at intervals to highlight trees and shrubs many of which are considered to be foundation plantings of the estate, meaning that the species was included, often in large groupings repeated throughout the grounds, in the estate’s early landscape design. Here is a small part of what we saw: 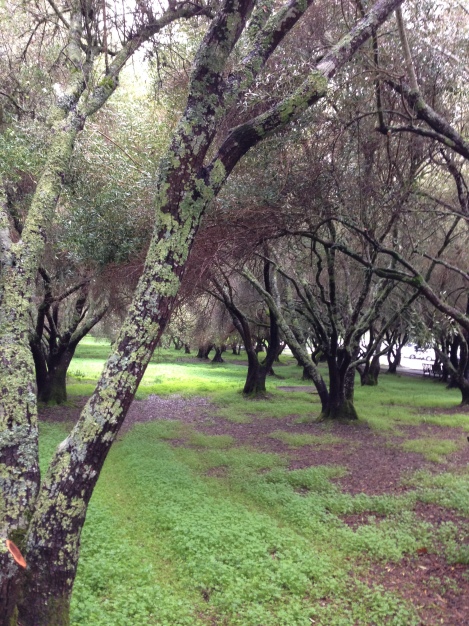 This stately grove of Olea europaea ‘Mission’, or Mission olives, was planted around 1918 and is an original landscape feature. The Mission olive is native to California and was developed by Spanish missions in the late 1700s. The trees in winter have a soft cushion of oxalis underfoot and still bear fruit after almost 100 years!

An allee of Plantanus x acerifolia, commonly called London plane trees, is an example of a stylized pruning technique called pollarding. If left to mature naturally, these deciduous trees would grow to 65-100 ft. tall with trunks more than 10 ft. in diameter. Pollarding produces the short, club-like branches you can clearly see in winter. As spring arrives long whips of new growth will leaf out to provide a shady canopy and a tree whose size is much more in keeping with the needs of the walkway. Growing against the building’s brick wall you can see the leafless trunks of a very large wisteria. Filoli has both Wisteria floribunda (Japanese wisteria) and Wisteria sinensis (Chinese wisteria) growing on many of its brick facades. Without a label it is impossible for me to tell which species this is until it leafs out and starts to flower. I’ll check back in on this one as the year progresses–it will be spectacular to photograph in bloom!

Three species of camellias are prominent in the Filoli landscape: Camellia japonica, Camellia sasanqua and Camellia reticulate. Pictured are several cultivars of sasanqua camellias. Mrs. Roth, the second owner of the estate had a particular fondness for camellias and had them shipped in from all over the world. Many cultivars of Helleborus, commonly called Lenten Rose, carpet the shaded areas under the camellias. I especially liked this one which almost appeared striped from above.

This amazing specimen is Ulmus glabra ‘Camperdownii’, the Camperdown Elm. This cultivar is unable to reproduce from seed and is propagated from grafts. The wide canopy and contorted pendulous branches develop slowly over time, ultimately reaching up to 30′ high and wide. This Camperdown Elm was planted in 1918. These elms are very susceptible to Dutch Elm disease and thus are rare in world today, usually found on large old estates. In the background left you can see three of  the over 200 Taxus baccata ‘Stricta’ which are planted on the property. Cuttings for these Irish Yew trees were taken from Muckross, the Irish estate of Filoli’s original owners, Mr. and Mrs. William Bourn, II.

Our semi-sogginess did not dampened our enthusiasm as we finished our walk and gathered up our belongings for the day, looking forward to our next class in March.

Daffodils lead the way each year in Filoli’s parade of blooms. Although I saw several blooming naturalized colonies my visit was just a bit too early to see them in their full glory. The estate’s annual event, Daffodil Daydreams, spans Friday, February 24-Sunday, February 26, and will feature talks, tours, demonstrations and hands-on activities all in celebration of this beautiful bulb whose blooms signals the coming of spring. If you would like more information about this event or anything else going on at Filoli go to their website: http://www.filoli.org