It would prove to be a gorgeous spring day at both my home and at Filoli–some 170 miles away. The day still started very early for me but the drive was uneventful and I even arrived early enough to wander and take a few pictures before class started at 10:30 am.

Part II of Botany for Horticulturists was today’s morning session. Last month in Part I we got familiar with botanical nomenclature and explored plant structure including roots, stems and leaves. Now we would delve further inside the plant, learning the intricate parts of the flower which facilitate reproduction and about the functions that drive plant development: photosynthesis, respiration and transpiration. While none of this was new to me, I am definitely not a botanist, even self-taught, and I appreciated both instructor Mimi Clarke’s lecture and the great reference sheets she included in our class notebooks. After a bit of book work she gave each of us a hand lens and we worked our way through dissecting one of Filoli’s famous daffodils–it was amazing to see the developing seeds deep down inside the ovary wall!

After a fast bite to eat at the garden staff’s outdoor lunch area we gathered again for our afternoon garden walk which was to focus on general pruning principles. The first and really only principle started with making the decision to prune. If your plant doesn’t require pruning to improve plant health, develop branching structures, enhance flower or fruit production, control growth, alter the natural growth to train it into an artificial form or reinvigorate it after years of improper pruning–put your tool away. There is no pruning just for pruning’s sake. There is no pruning everything in winter just because it looks like it is dormant and it is easier to get it all done at once.

Mimi’s standard outfit this time of year includes her bypass pruning shears in the sheath on her belt and her folding curved pruning saw tucked into her back pocket. She uses the pruning saw in circumstances that I would have chosen loppers. She explained that loppers are fine for rougher cuts but as they tend to cause the branch to split, she chooses the small saw for finish cuts. Point taken–I am going to find my folding saw (I may actually have 2) as soon as I get home!

We spent the next couple of hours moving from place to place in the garden as Mimi walked us through what we need to know BEFORE we prune. I have taken many pruning workshops but this was the first time an instructor taught the skill as an exercise in deductive reasoning rather than specific rules for specific plants. I loved it!! There are no pruning free rides–as gardeners we must do the homework first before we get the tools out.

As Mimi wrote in her handout “5 Things to Know Before you Lay Steel to Wood:”

Know what plant you are dealing with–you’d think this is a no-brainer but maybe not!

Know the plant’s flowering habit–does it bloom on the current season’s growth or on the previous season’s growth (new wood or old wood?) Spring flowering shrubs generally bloom on last year’s growth and are pruned soon after they have finished blooming. Pruning them in late summer or winter will remove the developing flower buds (still unseen) and drastically reduce spring flowering. Most summer flowering shrubs bloom on new wood and can be pruned in late winter or early spring to encourage the new growth which will produce the flowers. These guidelines are not without exception so we must do our research first.

Know the natural growth habit–what is this plant supposed to look like? Is it tall and skinny or short and mounding? Are the branches arching and fountain like or stiff and vase shaped? Where is the most vigorous growth found–shoots arising from the crown or at the branch tips? Is the plant you are trying to evaluate for pruning the right plant for the space and conditions in which it is planted?

Know the plant’s ability to resprout from old wood–not every plant can recover from serious pruning down into old wood. Mimi cited the example of old and woody rosemary as a plant which usually will need to be replaced once it gets badly out of shape.

Know what you would like your end result to look like–is your desired result appropriate for the plant and for the site? I have seen more ligustrum trimmed into 2 ft. high cubes than I ever care to admit. This question goes hand in hand with knowing what your plant’s NATURAL growth habit.

Our first example was a very long row of quince which are being trained into a hedge. We worked the steps: the plant was properly identified; we determined it was a spring bloomer and blooms on old wood; we learned its natural growth habit is to push vigorous new shoots up from the base of the plant in addition to adding growth at the tips and that its normal habit is open and airy with long arching branches. As the plants are being trained into a hedge and are in bloom now the pruning prescription included waiting until after the bulk of the bloom is gone, removing about 30-50% of the branches from the crown to encourage new shoots from the crown, making heading cuts about a foot or so lower than the desired hedge height which will promote lateral growth from the side buds to fill in the hedge and thinning out some existing lateral growth that is crossing or too crowded. Toward the end of the hedge row a lone quince which may have lost its neighbor connecting it to the hedge gave us a peek at how an individual specimen would look.

We moved on to the Gentleman’s Orchard where fruit trees of all kinds can be found. Several people in our group have home orchards and Mimi spent some time talking about training young trees and the importance, again, of doing your research to know your tree’s  natural habits and optimum fruiting conditions. This topic could have been a whole day’s class on its own. On the border of the orchard there is a fabulous row of very old espaliered fruit trees.

Although hard to tell by the photos these trees are very old and probably close to 16 ft. tall! I was interested to see that the trees were not all the same fruit. I saw both Apple ‘Gravenstein’ and Pear ‘Louise Bonne d’avranches’ and I only looked at a few tags. This stop gave Mimi a chance to talk about how the specialized art of pruning to espalier is a valuable tool to have fruit production in small spaces in addition to an aesthetically pleasing garden focal feature.

As we passed out of the orchard and into the more formal parts of the garden it was wonderful to see that I had not totally missed the spectacular show of naturalized daffodils for which Filoli is renowned!

We stopped in to check on this grouping of Hydrangea macrophylla that had been as yet untouched on last month’s walk. Their pruning had been completed and again we walked through “our things to know before pruning” in an effort to apply them to the work that had been done.

The afternoon was growing short so as we walked back to our potting shed classroom we went over again the 4 basic pruning methods, all of which had been observed at one point or another on our walk:

Pinching–pinching back with your fingers the terminal (end) growth to produce dense, twiggy growth and induce flowering

Thinning–best used with shrubs that sprout from the base as well as the branch tips and opens up structure by removing unproductive, vegetative growth or growth that detracts form

Shearing–removing all new growth without regard to whether you are cutting branches or leaves, use only on hedges and even then know that eventually you will have a bare twiggy inside with green only on the outside where you have cut

As long as this post has been I cannot leave you without sharing some of what was blooming at Filoli. There are still many potted daffodils and the potted tulips and their friends are clamoring for attention also. And so much more…take a break now if you are tired of reading but make sure you come back for the photos below!

Amazing displays of potted bulbs near the Visitors Center… 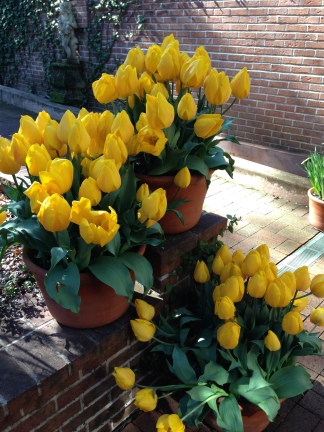 The house in its spring glory…

And all around the grounds… 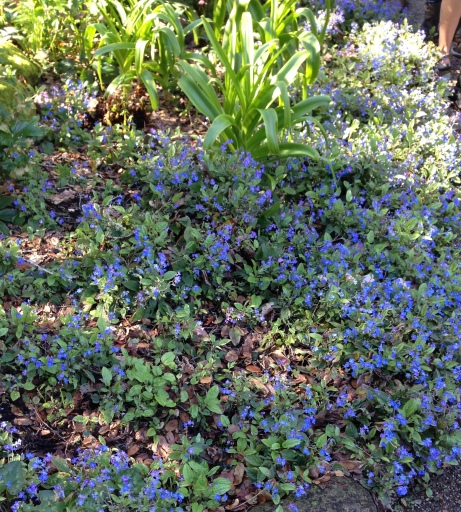 Forget-me-nots, Myosotis, have naturalized everywhere and have made especially large colonies in the shade of mature oaks.

I have seen many Trillium but never one with this coloration. I will check with Mimi at our April class to see if she knows the species or cultivar. 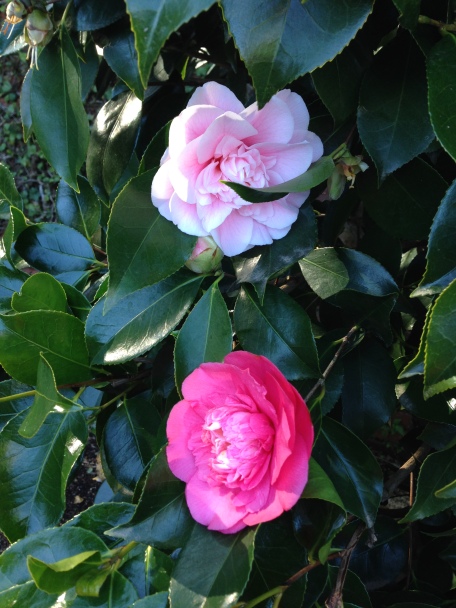 There are still lots of camellias in bloom–this very large shrub had both of these flowers on it. I could not see a graft anywhere to indicate that one cultivar had been grafted onto another so this may be a sport (naturally occurring genetic variation.) 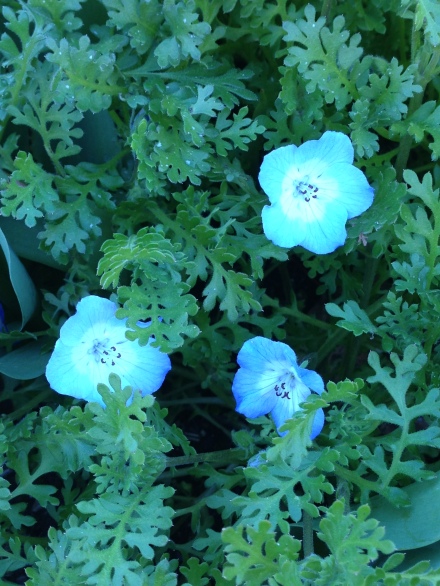 Filoli’s signature tulips beds are underplanted with Nemophila menziesii, commonly called baby blue eyes. Everything in the beds (this is just a small section above) is propagated for the season in Filoli’s greenhouses. 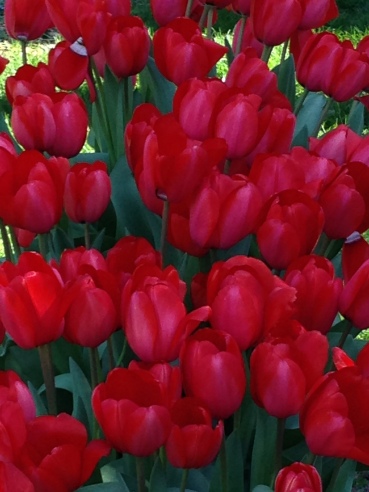 The potted tulips are coming out for us all to enjoy. There are hundreds more waiting their turn in the cold frames right outside our classroom door. On Thursday, March 16, the garden will stay open until 8 pm and there will be a lecture event entitled The Culture of Tulips. Go to http://www.filoli.org for more information or to register to attend.

Deciduous shrubs are less in favor in California than in other parts of the country so I was really pleased to see several Viburnum x burkwoodii in bloom and just starting to put on their new leaves. As you can see, the shrub itself, lower right, doesn’t look like much! The flowers are very fragrant and lovely in all stages of bloom.

I will stop now before you lose your patience! Good-bye Filoli–see you in April. 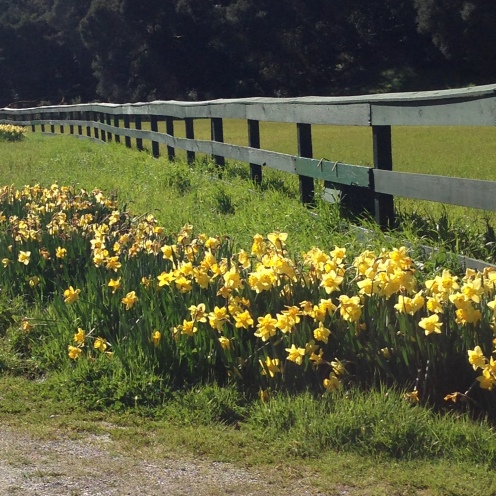 2 thoughts on “A Year in the Garden…Filoli in March”