The Garden Bloggers Fling is an annual social and garden touring event for garden bloggers across North America, organized and hosted by volunteer garden bloggers from the host city. This year’s Capitol Region event features Washington D.C, Virginia and Maryland. Since its 2008 kick off bloggers have gathered together in garden cities from Seattle to Buffalo and Austin to Minneapolis, learning about the region’s unique garden character and challenges by touring both public and private gardens. There’s plenty of time to meet and greet and lots of fun goodies from sponsors. This is my first Fling and in just the first few minutes I have found the group to be very friendly and interested in sharing their garden experiences and learning about mine. As a novice blogger I hope to get some tips on the fundamentals I have been fumbling through and absorb the energy which abounds in gatherings of people who share similar passions! I was excited to put a face to a gardener from Maryland who follows my blog!

We boarded buses to travel to our welcome event and dinner at Willowsford in northern Virginia. Willowsford is a rural residential development which includes 2000 acres of open space, part of which is a working farm–more about this in a bit. Capitol Region Fling Director Tammy Schmitt welcomes us and introduces both sponsors and participating garden owners who have joined us for dinner. Our light but delicious meal in the beautiful back garden space is sponsored by American Meadows and High Country Gardens.  Note to self for future parties: a cube of perfectly cooked beet beside a petite ball of goat cheese rolled in something a little crunchy (finely chopped nuts?) makes a wonderful single bite! 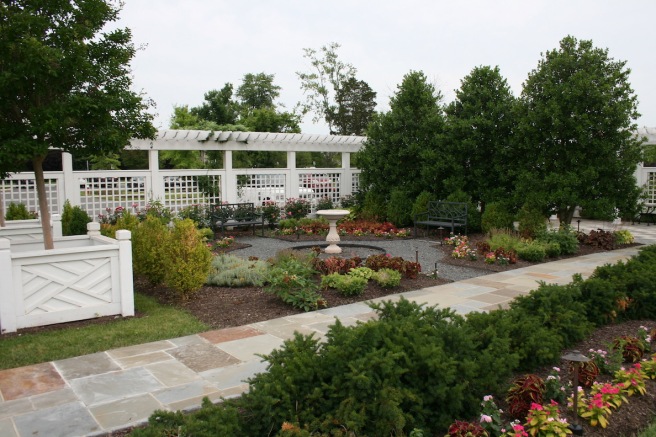 After our taste buds and tummies were satisfied we took the short walk to the Willowsford Farm stand, accompanied by Farm Manager Michael Snow and farm employee Jen. 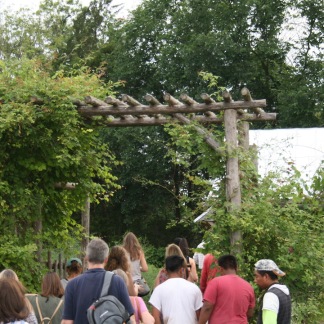 Michael takes this time to give us a little history of this unique partnership between housing and farming. Loudoun County, VA is apparently caught in the age old push pull between development interests and rural interests. In some areas development has been completely stopped while other areas are called ‘transition areas’. In areas designated so, any development must be balanced with 50% open space. The developer of Willowsford purchased 4000 acres of land, of which 2000 will remain open space, including the Willowsford Farm. The large homes are clustered on what Michael refers to as “smaller lots”–he clearly has never been to my home state where we build on postage stamps! A non-profit called the Willowsford Conservancy and Farm manages about 300 acres on which herbs and vegetables are grown and livestock managed for both meat and eggs.

The developer has capitalized the farming operation and produce from the farm is sold to the public at the farm stand. Willowsford Farm has establish a CSA which currently has about 300 members, about half being residents of the surrounding homes.

Michael shared that the operation is a little over five years old now and when asked about the operational model for which he strives he replied, “to grow stuff we can sell to keep us going”. He added that they are always interested in new ways to partner with the development’s event center kitchen. The Farm sells produce directly to the kitchen; food is cooked there that then comes back to be sold at the farm stand. They also offer cooking classes relevant to whatever produce is plentiful at the moment.

We set off through the herb garden with farm dog, Bella, along side, to see a small part of the farm itself which lies just beyond a riparian area–sort of a through the woods and over the river trek! 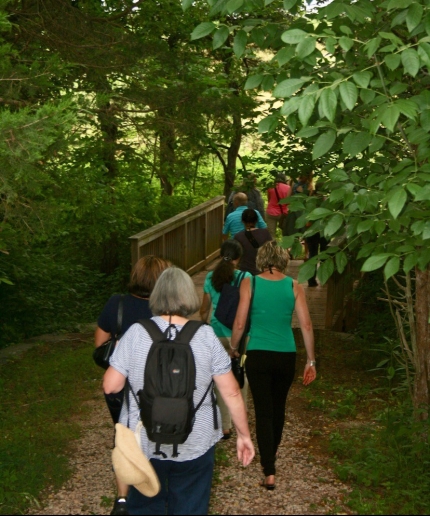 Michael and Jen make a quick stop at the home of the farm’s two massive geese, Ben and Not Ben. The poultry on the farm, about 1000 chickens and 800 hens, is managed as what’s called ‘pastured poultry’. The population is housed in small groups in rotating locations, enabling the birds to contribute to the ground’s fertility by doing what they do best. Periodically the small chicken enclosures are picked up and moved to new areas, spreading the wealth around. A herd of goats also reside on the farm and they earn their keep by being hired out to clear ground for other local farmers.

Adjacent to this poultry area is a plot of ground that had been used for the farm’s venture into ‘forest farming’. This concept was new to me but several others in the group were familiar. In the photo below you see the area which really doesn’t look like much! The premise is that you select a small area and anchor it with the planting of a tree. the ground beneath the tree is then planted with nitrogen fixing shrubs and perennials which could provide a specialty crop product under the tree’s canopy. I think this will require more study for me to really understand it but Michael Snow confided that the weeds had gotten the better of their efforts anyway!

The farm is responsive to growing what the public asks for and so is growing a number of beans and gourds favored by Southeast Asian cooks–remember Michael’s ‘grow stuff we can sell’ model! 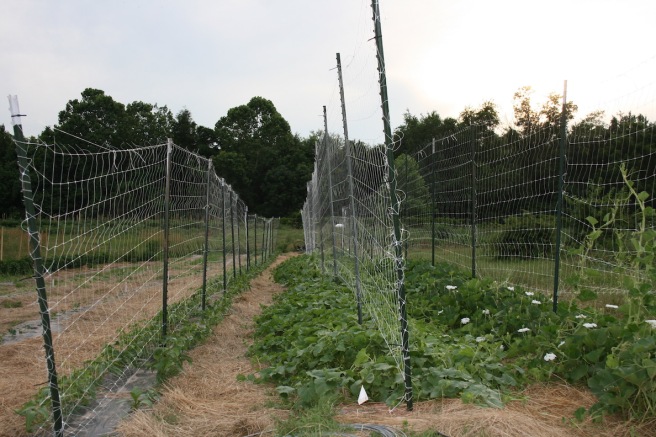 Many of the leafy crops are grown in mixed groups under row covers to protect from insect damage. Michael confirms the radishes are ready for harvest!

We got to taste a little of the Salanova lettuce being grown. This leafy lettuce grows in heads but when picked provides a variety of color and texture from one layer of leaves to the next. Michael said it stands up to the heat and humidity and tastes pretty good even after it bolts! 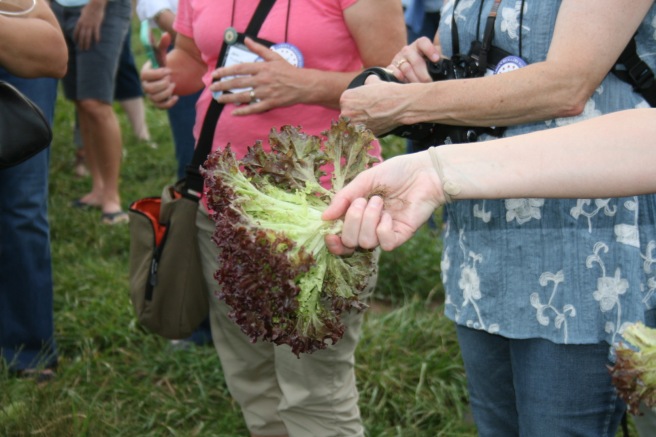 Coming full circle we stop at the newly erected  plastic covered hoop houses, home to the farm’s tomato crop. The high humidity is problematic for tomatoes and they have found much more success growing them under the plastic. 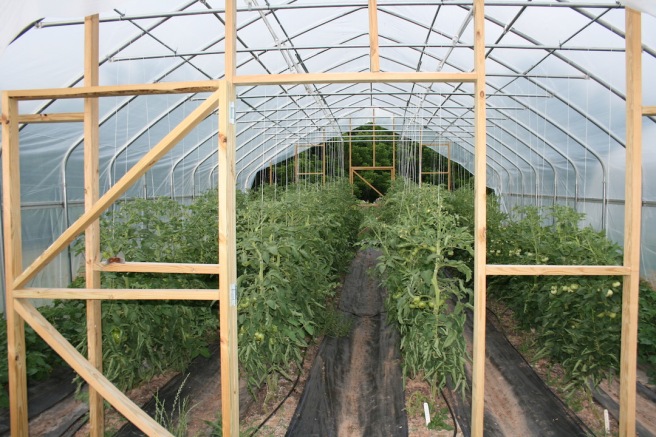 Many of you know I am not a veggie gardener–my husband comes from a large farming family and we always have boxes of produce and fruit on our doorstep during the growing season–but I am always interested in hearing the stories of people who passionately grow food and make finding better ways to do it their life’s work. Bravo to Michael Snow and his colleagues for making this unique partnership a win-win for all!

TOMORROW: Hillwood, the former home of Marjorie Merriweather Post; the US Botanic Garden and the gardens of the Smithsonian; the Franciscan Monastery and a mystery guest speaker after dinner

2 thoughts on “Garden Bloggers Spring Fling…getting to know you!”