I know I am not the only one for whom the arrival of truckloads of bold red poinsettias to every type of business in possession of a cash register signals the coming of Christmas. I recently had the opportunity to spend an hour with Belmont Nursery owner Jon Reelhorn and learn more about the journey all those plants make in the months before they end up on our mantels, holiday tables and front porches. Thank you to my friend and blog follower Ann D. for making the introduction to Jon–I learned so much!

Within minutes of shaking hands with Jon and stepping into the first of several covered greenhouses I would see, he disabused me of my clearly outdated understanding that growing poinsettias is a process of precise calculations of  daylight hours and manipulating those daylight hours on a schedule of black-clothing to the ultimate end of bringing the plants into bloom just at the right point for retail sale.

Let’s step away from the poinsettias at Belmont for a brief history lesson which starts with the Ecke family of Southern California. In a 2008 article, the Los Angeles Times characterized the 4 generations this way: “The Ecke family of Southern California is to poinsettias what DeBeers of South Africa is to diamonds.” I’ll try to put the story in a nutshell for you. German immigrant Albert Ecke and his family established a dairy and orchard in northeastern Los Angeles in the early 1900s. The green and red poinsettia shrub native to Mexico and Central America grew wild throughout Southern California and Mr. Ecke started to grow the plants outdoors on farmland in Hollywood, selling them from street corner stands.

Albert Ecke’s son, horticulturalist and businessman Paul Ecke Sr., saw the plant’s commercial potential. Through his closely guarded propagation efforts the somewhat straggly outdoor plant was turned into a sturdy floriferous potted plant and he moved the operation to Encinitas on  the San Diego coast. Paul Ecke Jr. expanded the family business and by the 1960s the plants had been moved indoors to greenhouses. Where the family once shipped thousands of plants by rail all over the US, Paul Jr. saw the benefit in selling the cuttings to other nurserymen to be grown locally. The uniform plants with multiple branches emanating from a single stem are still referred to as the “Ecke style”.

In the early 1990s a university researcher published an article revealing to the horticulture world that the Ecke poinsettia secret was not in the pollination or breeding but in the grafting of two types of poinsettias, thus opening the door to competition. The last poinsettias were grown for sale at the Encinitas ranch in 2006 and the business was sold in 2012. Breeding efforts in the last 2 decades have produced plants of many hues and plants with crinkled or marbled bracts. Most importantly, advances in breeding have lead to plant cultivars which bloom naturally early enough for the Christmas sales period–no more counting the daylight hours and black-clothing. Now, back to Jon and the Belmont Nursery poinsettias.

The poinsettia’s botanical name is Euphorbia pulcherrima. Indigenous to Mexico the plant derives its common name from Joel Poinsett, the first United States Minister to Mexico, who introduced it to our country in 1825. Today there are over 100 cultivated varieties and they remain one of the most popular holiday flowers.

Most of Jon Reelhorn’s poinsettias are pre-sold for use as holiday fundraisers. A single greenhouse at the retail location houses plants ready for shoppers; to see the breadth of Belmont’s poinsettia crop we hop into Jon’s car, along with a friendly white lab, and head for the nursery’s nearby propagation grounds. Our first stop is Henderson Experimental Gardens on McCall Avenue. Jon’s brief history of this site which has been used for plant production since the 1940s leads me to believe it is worthy of a blog post of its own–I’ll save that for another day.

Wow! The greenhouse door opens (with a small motion from Jon, the lab acknowledges that this is a no dog zone and waits for our return) to this breathtaking site. 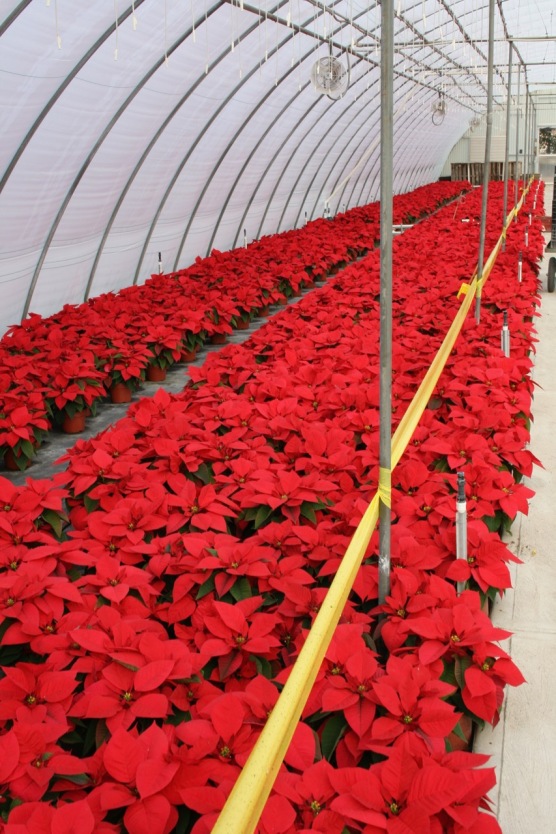 These are ‘Premium Red’–Belmont’s most popular poinsettia. Very sturdy–they are not caged or staked like the ones you can pick up at the big box stores-and fully red; these are the classic Christmas potted plant.

Belmont’s poinsettia crop begins with unrooted cuttings from South America. In general, the nurseryman manages the production of each variety based on its genetic flower initiation date and the desired ready for market date. For the varieties Jon favors September 21 is the target date to have his cuttings in production–making them a perfect  crop to fill some of his seasonally empty greenhouses. At Belmont Nursery the cuttings are planted in their finished sized pots (there is no successive ‘potting up’ from small to finished size) and misted only until the bracts emerge. Drip irrigation meets their water needs from then on. The plants get no extra temperature control–they grow with whatever day and night temperatures prevail. The sticky yellow tape running along the rows attracts white flies and other pests and clues Jon in to what is going on in his greenhouse so that he can treat appropriately. A very specific regimen of pinching is the key to a sturdily branched plant meeting the grower’s size desires. 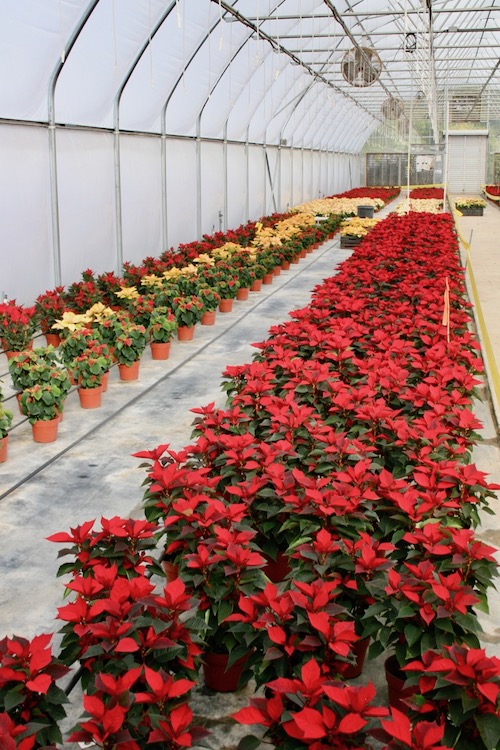 At yet another growing site–the vast majority of the several thousand plants Belmont produces each year are in 6″ containers but in this greenhouse there are a few 8″ pots being grown of some varieties with fancy Christmas Rose bract shapes. On the right above is the variety ‘Jester’. It has a much more upright bract than ‘Premium Red’, allowing more of the lower green bracts to be visible. The plants in the middle photo are slightly less mature than the ones directly above–they just need a little more time.

Jon’s favorite variety is called ‘Ice Crystal’. This year he ordered 200 cuttings but his suppliers sent him the cream and pink ‘Marble’ by mistake. The one above looking as though it has been dusted with pink sugar is ‘Ice Crystal’.

‘Ice Crystal’ is exceptionally prized by Jon this year as he has so few!

In response to my query about my preferred bright pink plants, Jon explained that the reds are overwhelming more popular and after many years of running out of red and having the other colors left over,  he sticks to the sure winner–clear medium red like that of ‘Premium Red’.

He did offer up this petite fuchsia called ‘Princettia’ which had lots of flowers on a small scaled plant. I checked this one out online and found that it is one of a series which includes white, several shades of pink and a red. It is being promoted as a bed and border planting in mild winter areas, blooming right up to first frost.

The development of a Thanksgiving poinsettia called ‘Gold Rush’ has expanded the plant’s traditional season. There were a few of these left for retail sale on the day I visited. They were truly beautiful and now that I have them in my sights I plan to make them a part of my late fall tablescapes from now on.

Thank you to Jon Reelhorn and Belmont Nursery for expanding my knowledge of and appreciation for what goes into producing these iconic symbols of the Christmas season.