The last 10 days or so has brought California’s Central Valley a little much needed rain. Even more important has been a small improvement in the mountain snow pack from which our summer water availability is determined. With all due deference to those gardeners on the east coast huddled in their homes as another nor’easter bears down and even our SoCal compatriots for whom even a small downpour may mean mudslides on ground denuded by last year’s wild fires–we still get a little excited by a little rain, even this one which, despite the cold nights, seems almost tropical.

This morning’s downpour affirmed that our grading of this newly lawn free area in the front garden has allowed the water to soak in without too much run off. The brick serve as a temporary visual reminder of a casual path from the near the front door to a future Little Free Library. 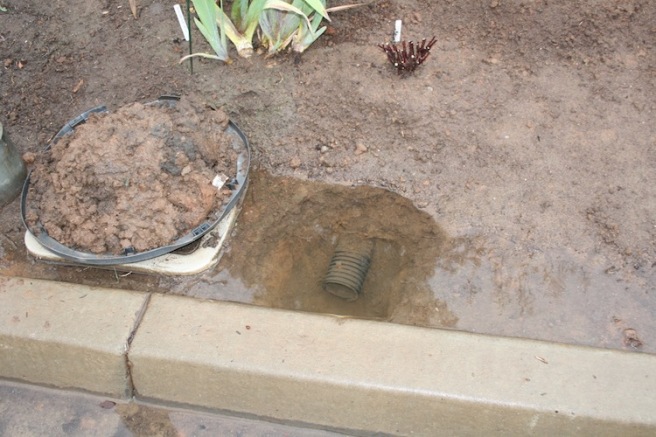 This is the second underground drainage pipe we have found in this yard which was brought to the street and terminated in an upward facing drain without coring the curb to let the water flow out! We had the one on the Ila side cored only a few weeks ago and just made yet another call to our concrete drilling friend for this one. Seems as though bad things comes in threes and so I fully expect one more to appear before all is said and done.

Only a few new things have found a place in this bed so far–several of which have been in my ‘holding area’ since my fall 2017 nursery rounds. Much of what we left from the original border which wrapped the lawn is well established enough to withstand some drought. I am focusing on unthirsty plantings for the new additions. While the area has automatic sprinklers the hope is that we will be able to both reduce the number of heads and the amount of run time significantly. Top left is Ozothamnus diosmifolius ‘Dark Pink’–common name dark pink rice flower–selected specifically as a contrast in form to the bank of indian hawthorn in the background. To its right is Phlomis purpurea–purple Jerusalem sage. The bottom photo is Salvia mellifera ‘Wild Bill’ which is purported to develop a gold variegation along the edges of mature leaves when it is grown in full sun. This is one of the newest of the black sages introduced by Monterey Bay Nursery  and is a sport of Salvia mellifera ‘Calamity Jane’.  All three of these will require minimal watering once established but can tolerate varying levels of irrigation with good drainage. Fingers crossed, full steam ahead on this bed once it dries out a little!