My out of town garden tour junkets provide me with lots of opportunities to shop at both botanical gardens and retail garden centers all over California. Although I am a believer in purchasing plants grown locally or in conditions easily adaptable to my garden we have very few such resources in my community. Our few independent retailers are good but don’t often venture out past the stock selections used all over the Central Valley–sort of an “if it’s not broken, don’t fix it” attitude. True be told garden centers will only select and stock what people will readily buy–it’s not realistic to ship in lots of niche plants which may not sell. So I travel..I look at everything everywhere I go…and always come home with a few new plants to try out.

On my second trip to the East Bay area in 3 weeks I left an extra hour early to be able to do some shopping at the East Bay Nursery on San Pablo Ave. in Berkeley. I’d stopped there briefly on my first trip and came back prepared with a short list of hopeful garden additions. A few bits and pieces, not on the list, sneaked their way into my cart! 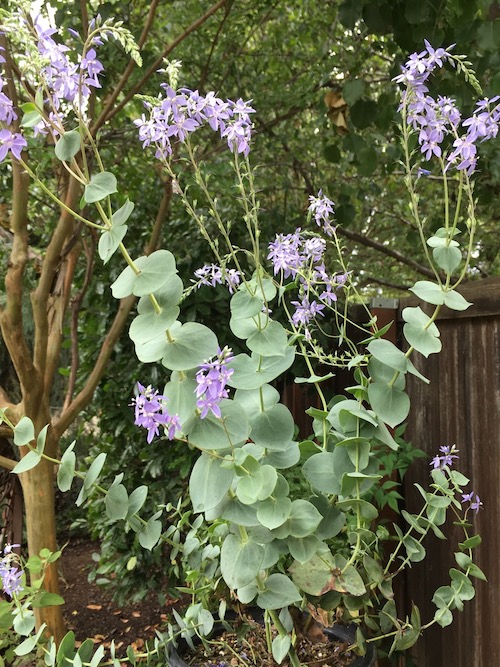 Meet Parahebe perfoliata, common name digger’s speedwell. I did a quick Google on this and decided it was worth try, if only for the eucalyptus like leaves and nodding racemes of small blue flowers. I have Parahebe catarractae (below) elsewhere in the garden and it is a very small woody subshrub with small green leaves and white flowers bearing a red eye. Given the stark differences I did a little more research when I arrived home.

The parahebes were formerly classified as genus Hebe and before that as genus Veronica–now the cloud’s are lifting a bit. Speedwell is the common name for perennials in the Veronica genus. Apparently the shrubbier ones were split off of the classification for the softer herbaceous perennials, then the smallest, or subshrubs, were split off yet again. Are these folks lacking for other productive work??

Both my parahebes are from down under–Australia for the new one (hmm…eucalyptus like leaves) and New Zealand for the little white one.

Digger’s speedwell is low growing to about two feet with a graceful arching habit. The evergreen foliage of rounded blue-gray leaves clasp the stems in opposite pairs making it a handsome foliage plants and giving rise to another common name in the literature, shish kabob plant. The flowers are set on new wood so pruning for shape and density is best done mid-summer.

The terminal spikes of veronica-like blue flowers produced in April or May are airy but heavy enough to give the racemes a nodding look.

I’m going to pot this little shish up and try it in a few places in the front garden, close enough to paths to not get lost or overrun but with enough neighbors for its flowering stems to have a little support and stay off the ground. Full sun or light shade is recommended and as with most Australian specimens, good drainage is essential.

I can also be drawn in by a good story on a plant label–I picked up this new little sage labeled Salvia ‘Rohana’s Angel’ grown by emerisa gardens (they don’t capitalize either word.) This was a chance seedling found amongst Salvia greggii, S. microphylla and Salvia x ‘Mesa Azure’ and thus its parentage is unsure. It’s a little one so I can tuck it in anywhere.

This bubble gum pink baby sports a little white edge on its lip and is named after the wife of the founder of emerisa gardens. Emerisa is a family run-wholesale nursery in Santa Rosa, CA that has seasonal retail hours from March through November. They specialize in four-inch plants emphasizing hardy and unusually perennials, herbs, ornamental grasses and succulents and have long been on my road trip list. Check them out at http://www.emerisa.com if you find yourself in the vicinity!