When the Garden Conservancy Open Days Directory arrives in the mail each April I can’t wait to read through the descriptions of the gardens included on any of the California days which I have already penciled in on my calendar. This garden preservation non-profit offers regular gardeners like you and I entre into beautiful private gardens to which we could never hope otherwise to have access. I don’t know if each garden’s preview paragraph and title are written by staff or by the homeowner but they always offer highlights not to miss and often historical information which enhances the visitor’s experience in the garden. Rarely are the profiles overstated–in the case of this third garden on my whirlwind Saturday in the East Bay–the title, at least, was understated. We all should be aging as gracefully or have lived as colorful a life as this garden has.

Having no real familiarity with Berkeley I was unaware of the the Hotel Claremont and its role in the development of the well-heeled, quiet residential streets which surround it. As I entered the area from south of the hotel I did not even see it until I had left the garden and then, having caught a glimpse as I was making a left turn, had no way to even take a quick photo for those of you who do not know it. I found this unattributed photo below to give you a flavor of its style.

Let me briefly tell you the tale of the home which this next garden graces as a way to set the scene to view that garden as it is today.

The Claremont Hotel was built on land formerly known as the Palache and Garber Estates, high in the Berkeley Hills. The vision was for a tourist hotel surrounded by 14 acres of park-like gardens, all seen from vistas around the Bay. The surrounding gardens were to set the scene for and encourage the building of beautiful homes in the adjacent gently rolling hillsides. Train and ferry systems recently developed would connect the East Bay to San Francisco, opening the area for refined suburban living by those who could afford it without limiting their access to doing business in the city. Residential lots would be large with significant setbacks, encouraging picturesque and park influenced front gardens. Ground was broken in 1906 and the hotel largely finished in 1915 after a number of financial issues and, ultimately, its sale to another owner.

Ten subdivisions of residential lots were released between 1905 and 1907 and many palatial homes in a variety of styles were built long before the hotel itself was open. The 4th release of lots was called the Hotel Claremont Tract and Mr. Howard Hart stood ready to purchase its prime lots, #1, #2 and #3 on which he planned to build a massive home in the Spanish and Italian renaissance style. These lots lay just southeast of the hotel on a street which curves back upon itself so tightly that they had street on all sides save the southernmost. Think of the letter U laying on its side–the curve of the U faces the Claremont and it would be prominent in the views of the 43 room manse. Lot #2 & #3 would allow room for a conservatory, ample gardens and chauffeur’s quarters built over garage space. Mr. Hart had made his fortune mining gold in the Klondike and no expense would be spared in the building of his new estate.

The first structure to be built on the property was the garage and its second story apartment. Built on Lot #3 with easy access to the street via a long curving driveway, this garage and the portions of the gardens developed adjacent to it are all that remains of the grand Hart estate completed in 1912. The balance of the estate has long since been divided again into smaller lots, now having homes of their own. Additional parts of the garden have been preserved at two of these homes but are not visible from the street.

THE HART GARAGE GARDEN IN BERKELEY 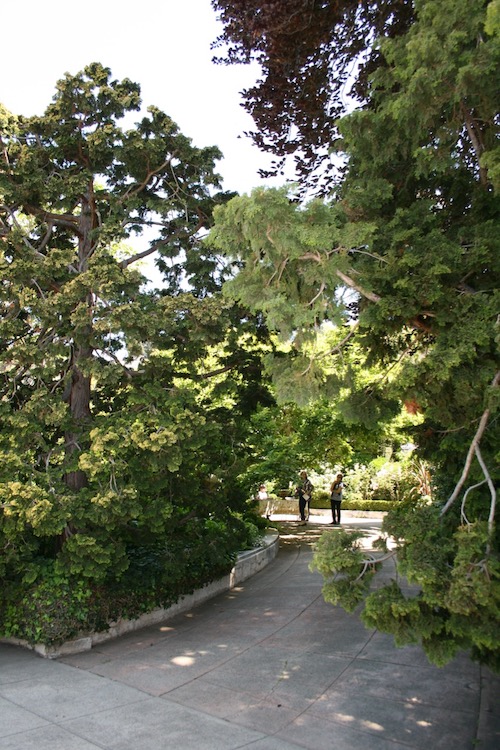 The current homeowner has characterized the property as “the ugly duckling in the neighborhood” and admits that she refused to even look at it when it came on the market. Neither the home (ok, the garage) nor the remnants of the once fabulous garden are visible from the street. There is nothing remotely translating to a “front door.” Living in an area starved for anything green and especially mature trees I knew it had to be beautiful back in there somewhere!

As you walk up the driveway there are lovely, primarily green borders undulating amongst lawn areas. Tall trees provide shade and shadows which only enhance the almost fairytale feel.

Cool and refined–perhaps what the Claremont Hotel builders had in mind?

To the right of the very wide drive is this first peek at the sweeping staircase leading to the apartment over the garage. the Harts lived in the apartment while the main home was under construction and perhaps that is the reason for such a grand staircase entry for a living space to be used as chauffeur’s quarters. Tall spires of Acanthus mollis are nestled in a very small footprint at the base of the stairs and what I think is a Phormium with its bronzy leaves is taller than I am.

I believe this open space leads to what was at one time the entrance to the lower area called “the pit” where car repairs were done. Directly to the right is a large paved area with parking for multiple cars.

A steep terraced slope filled with roses and edged in boxwood makes the transition from the concrete parking area up to the garden’s next level. The gaily black and white striped umbrella is one of several throughout the garden. 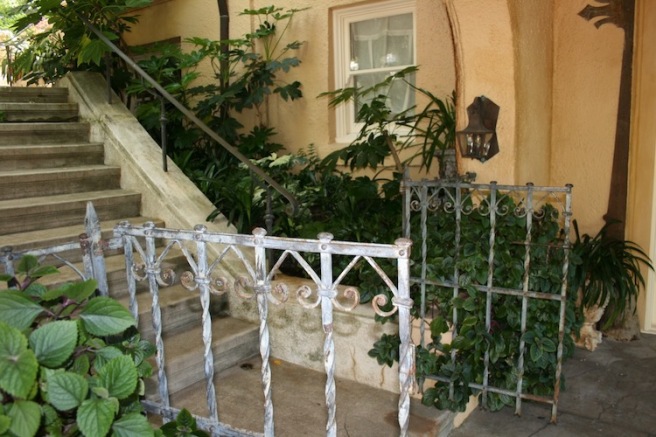 An interesting iron gate leads marks the stairway to the upper garden entrance.

From this angle you can see a bit of the arch belonging to the estate’s original porte-cochere which had been totally enclosed in an unfortunate past remodel. The current owner restored the porte cochere and cut in the wide staircase for easy garden access.

The next terrace runs fully across the garden and is home to another original garden feature-the pergola. 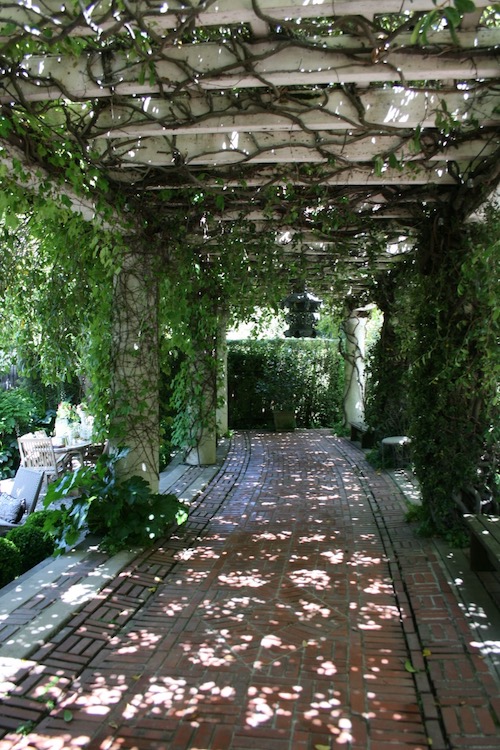 The sweeping pergola appears to have once connected the conservatory and farthest gardens to the main house. Sturdy circular columns support crossbeams cloaked in vines and lit a night. At the end you can see the current property line. I couldn’t tell if any of the pergola remains in the adjacent garden. Parts of this walkway needed replacement and the current homeowners commissioned custom brick, including its unique beveled edge, to make the best match possible.

Slightly downhill from the pergola is a lovely shaded sitting and dining area carved out of the existing shrubbery beds. The homeowner removed a wide swathe of old hydrangeas, added a couple of stone steps down and a gravel floor. She shared with us that this small change is one that made the most impact on day to day life in the garden.

The former flower bed is now home to a casual teak dining table and chairs on which she had placed welcome snacks and beautiful floral arrangements using materials from her garden.

This was a wonderful spot to relax for several minutes and look over materials detailing the history of the home and garden and some of the most recent renovations. The lady of the house was in the garden answering questions and made sure we didn’t miss this shady haven. Thank you to her and to the Berkeley Architectural Heritage Association for a wonderful booklet from which I took many notes from to be able to give you the area history which lead off this post. 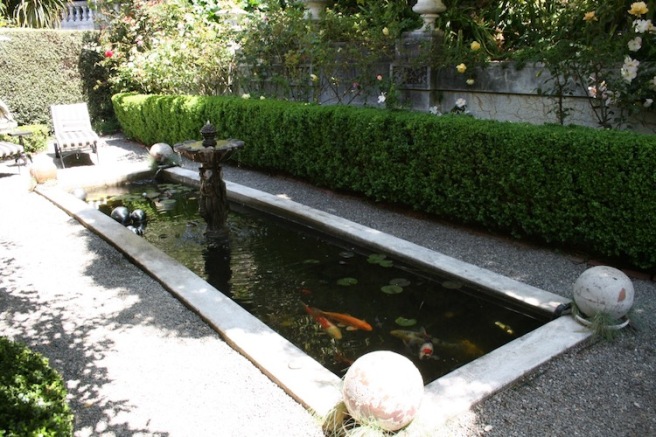 I stepped through the pergola on the uphill side to enjoy a long and narrow koi pond built in a classic style with water softly trickling from an embedded fountain.

A shady resting point at the far end of the koi pond shelters a marble statue which was found under layers of greenery and dirt when the garden was renovated. The black and white stripe fabric playing off bright green backdrops is a theme carried through the landscape. 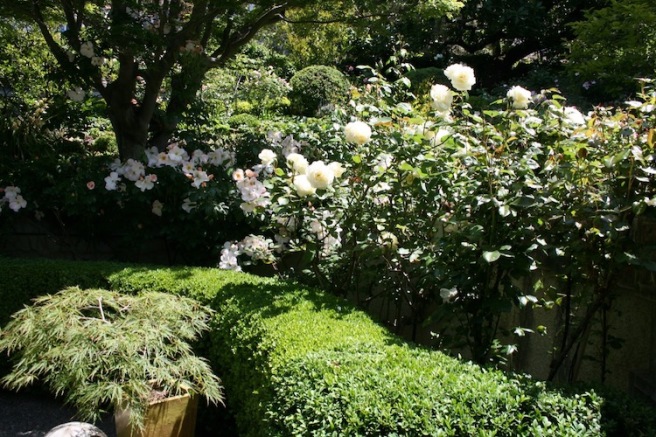 The slope on the koi pond end of the garden is more shady and more formally planted. These sculptural tree trunks and their leaf canopies shield the pond and its dual chaise lounge resting spot from the vista when you are high on the slope.

Out of the shade of the trees the slope plantings become more eclectic and more waterwise/sun tolerant.

There are lots of small succulents in the foreground. The plantings disguise the packed gravel and stone paths that zigzag their way up the hill.

At the garden’s opposite, end bistro seating is placed in front of a small stone fireplace. 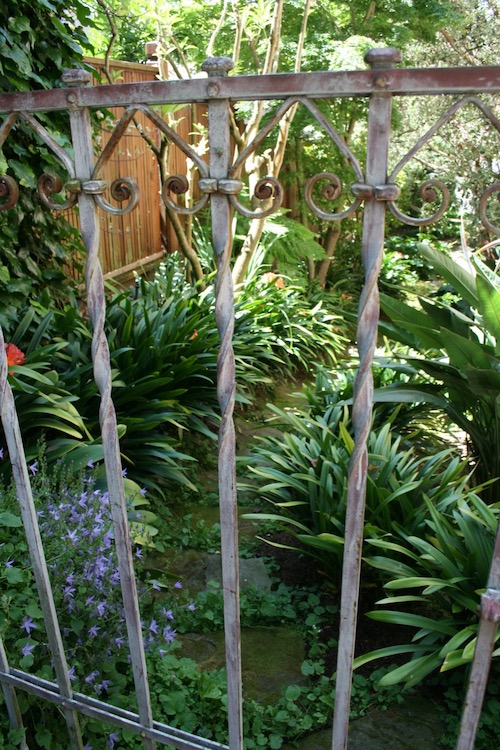 A peak through the gate next to the fireplace reveals a steep slope packed with agapanthus, bellflowers and cast-iron plant. A stepping stone path leads to who knows where?

I use the set of stairs closest to the fireplace to ascend the hill. Paths led both forward and to the left. Which way to go? I am going to wander my way up and across–let’s see what I find!

Large scale phormiums and fat agapanthus clumps cover a lot of real estate near the fence. This was one of only a few places where any other house (even the roof) could be seen. The sense of enclosure and privacy was wonderful–definitely in your own little world in this garden.

Reaching the uppermost cross garden terrace path I am in deep shade surrounded by acanthus, ferns, camellias and other low light classics. The home you can barely see in the background sits on a lot which was once part of this garden.

Looking across the garden pittosporum brighten up the shade and are clearly trimmed to keep them quite low. Much of the uphill side of the path is built up even further with rocks.

I am just about back to where I started my wandering adventure. 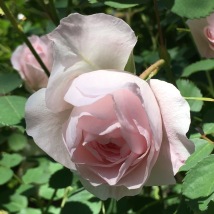 Beautiful roses, most but not all pale in hue, are a mainstay in this garden along with many classic plants from the era the Hart Estate was built.  Many decades old shrubs, trees and perennials were refreshed adding to the mature feel of the space. The traditional mixes freely with succulents and salvias. The terracing of the slope provides ground to grow many much more plant material than if the slope were simply graded. The multiple paths spanning the entire width of the garden lead you to believe you have walk very far from home when, in fact, you are only a few feet away.

This garden is up there in my top ten private gardens I’ve seen on countless tours over a decade. The mixtures of formality and playfulness, old and new, leafy and spiny are all very appealing. Regardless of its size and complexity it feels like a manageable garden, in part due to the casual but not messy attitude of the terraced slope. The shady seating and dining housed in the reformed hydrangea bed and the serene koi pond are both perfectly done. I would have loved to have seen the restoration of the interior space; wiping out the sins of the 80’s and reforming it from garage to beloved family home over the span of seven years. I’ll be watching the Berkeley Historical Architectural website http://www.berkeleyheritage.com for any interior tours in the future. A++ on this one! 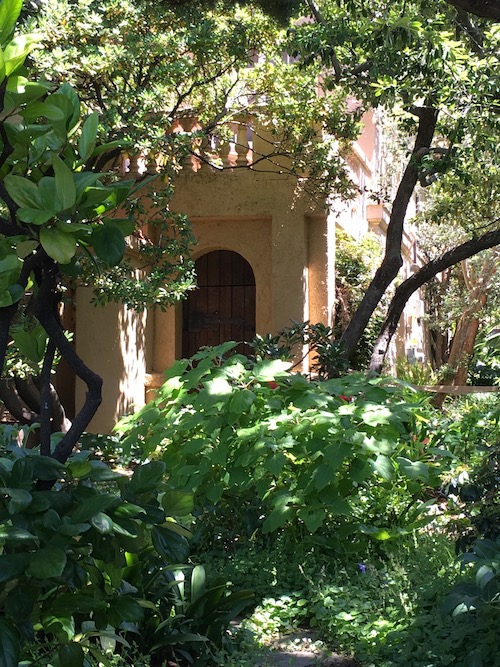 As I walked the narrow street back to my car I noticed this tiny arched door on the southeast corner of the HART GARAGE–another mystery I look forward to solving!

5 thoughts on “Easing into the East Bay…aging gracefully”