THE GARDEN OF CAROL AND RANDY SHINN IN FT. COLLINS

Newcomers in 2006 to the Front Range, Carol and Randy Shinn retired to Ft. Collins and have been experimenting in their garden ever since. Both are artistic by nature, Carol in the visual arts and Randy in musical composition. It was not until the next day that I became aware that this was the garden of THE Carol Shinn–a rock star in the art quilting world who is internationally known for her photo-based free motion machine stitched images.

Their new Colorado home came with an outdated lawn, uninteresting flower borders and juniper everywhere, including block the front windows. The new garden has a small puddle of lawn and now the perennials, conifers and collection of ground covers winding through and tucked amongst the rock paths and large rock outcroppings are the stars of the show.

Rock gardening has become Carol’s passion after adding the first granite and sandstone boulders to anchor her developing beds. She says the growth of the garden has been organic rather than that of a rigid structure based on a plan. Her experimentation with a bed of horizontal layers of sandstone, then later a bed of vertical basalt has cemented her love of crevice gardening–no pun intended.

The largest of the crevice gardens as viewed from several angles.

All of the crevice gardens are anchored with conifers which will, in time, provide more vertical interest. A wide variety of alpine ground covers and perennials are tucked in all the crevices. Colorado natives make their presence known everywhere. So much of this plant material is unfamiliar to me but I’m sure if I’d had a decent alpine/steppe plant reference book I could make sense of it. This was not the only garden we visited that compelled me to text my husband the message, “I need more rocks!”–by the end of the Fling I was texting simply, “What I said before, DITTO.”

This most recently planted crevice garden was designed by Kenton Seton, a rising star in this gardening style. Along with this bed Carol is developing a collection of miniature conifers. Central California gardeners tend to have conifer lust and so it’s unimaginable to me being able to grow both full-sized and miniature selections–other than a few pines, our dry air just crisps most conifers to brown sticks.

Carol’s gardening goals have grown organically also. Their pick of Ft. Collins as their retirement home was, in part, due to the belief that water was more plentiful here than other nearby cities. Her original garden goal was to create the beautiful and lush perennial garden we all covet in magazines and garden catalogs. Many of her original plantings, including a huge collection of daylilies from Randy’s father, remain but are gradually being replaced as needed with more xeric plants.

A narrow brick path leads into the back garden which has more traditional elements, especially in the shaded areas like this one along the fence line. Hostas, hardy geraniums and hellebores are seen here. 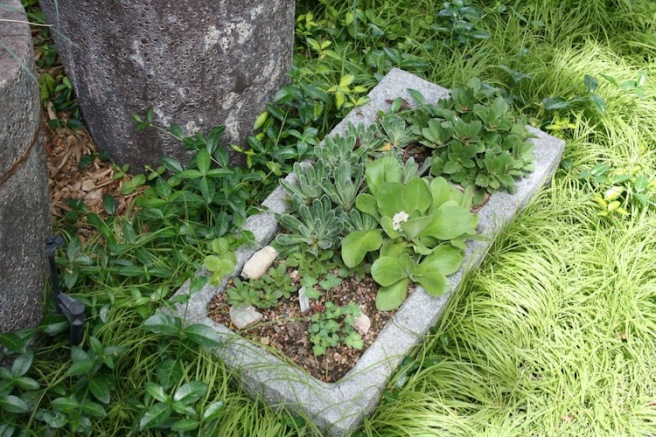 On the opposite side of the path, creative pots combined with diverse foliage colors light up the shade. 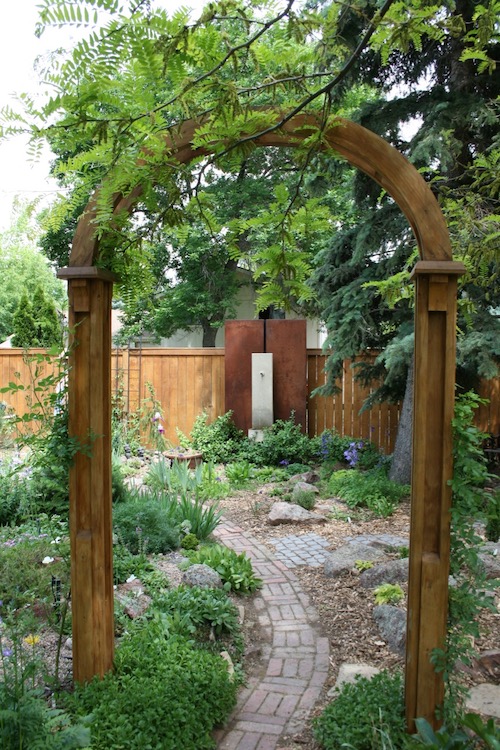 As the tree cover gives way to open sky another arch forms the perfect frame for the Shinn’s rusted iron water feature.

This island of plantings buffer the house from the lawn and sunnier garden areas.

In the open and sunny center, conifers and sun loving perennials thrive. Multiple paths using a variety of hardscape materials give the garden floor interest and easy access to working beds many vantage points.

A vegetable garden occupies the back corner of the garden, mostly obscured from the view from the house and main patio area.

This large raised bed runs almost the length of the back of the house, allowing for trees and shrubs to become garden walls. We had a sudden rainstorm a few minutes after this photo was taken and I was sitting at the far end where you can see fellow blogger Noelle already resting–we did not get a drop of rain through the tree cover while other standing on the back patio were soaked.

This garden is the one of the best looking works in progress I have ever seen. There is tremendous plant diversity–running the gamut from peonies to cacti and everything in between. It all is working well together supported by an eclectic group of year round structural elements including a diverse selections of conifers and a few deciduous trees. 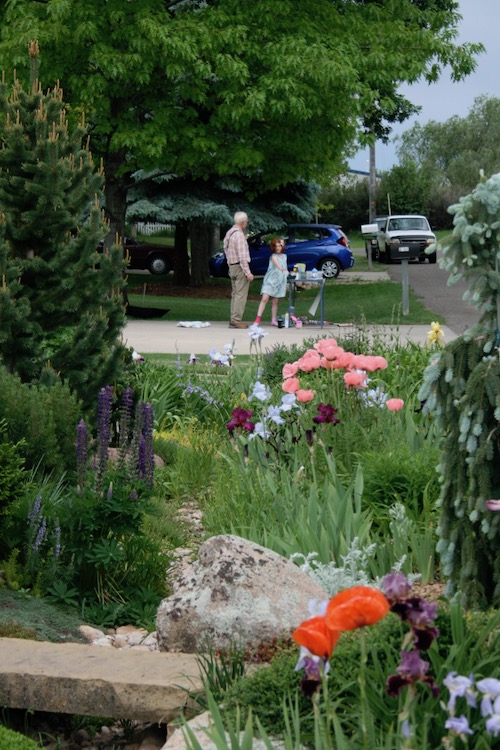 The stress that goes along with making your garden ready for a tour was not borne by this little copper haired neighbor–a budding entrepreneur who had set up a lemonade stand (plus cookies) hoping for thirsty garden bloggers. We gave her lots of business and I’m sure she was sad to see us go!

9 thoughts on “In a daze near Denver…art and experimentation”