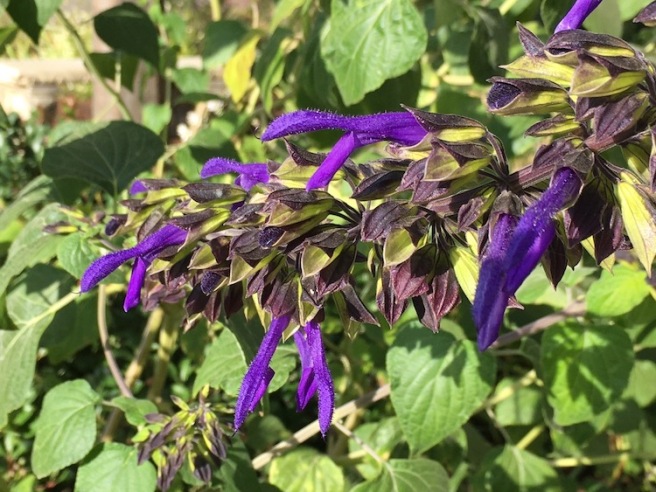 I have had several failed attempts to successfully grow Salvia mexicana ‘Limelight’–most recently a couple of years ago in my back garden close to the fencing so as to provide a green backdrop for other lower perennials planted in the foreground. As much as I would appreciate it, few plants die with a definitive autopsy report conveniently attached to their crispy brown stems. I am reasonably sure this last loss resulted from the species’ need for more shade and less of our death star summer sun.

Not to be defeated and with a few large open areas in the new front beds having a high shade canopy from the Raywood ash, I threw caution to the win and bought 3 wee 4″ pots in late March. The ‘Limelight’ cultivar is known for the chartreuse calyces which form in the fall signaling impending bloom. Unlike many of my other salvias which bloom year round given periodic cutting back, this one appears to be a true fall bloomer. As spring and summer passed the three little plants grew and grew. I did a little pinching back to promote bushiness but not having any experience of when they would actually bloom I was perhaps too timid, worrying about nipping off soon to be bloom spikes. 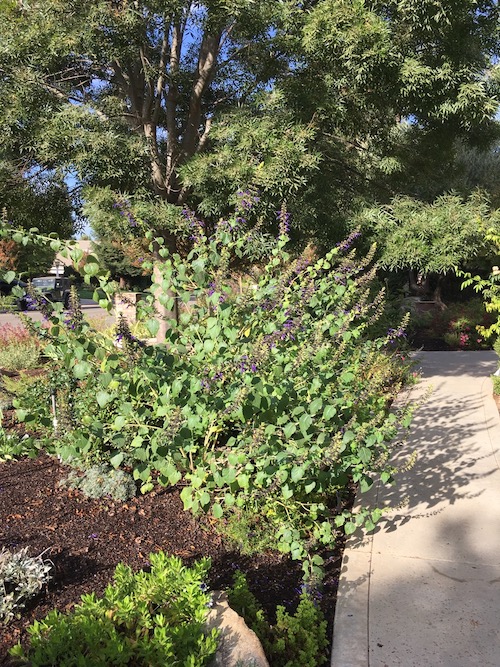 Here you see one of the three, having grown to about 6 feet tall and 4 feet across. A second is directly behind it but on the other side of the ash’s canopy, near an open pathway which provides me access to the bed for tidying up and planting tasks. The inflorescences which eventually grow to 6 or 8″ in length started to form just a couple of weeks ago.

The calyces on all of my plants lack ‘Limelight’s signature yellow-green color. A little research leads me to believe my plants may actually be Salvia mexicana ‘Ocampo’ which is known for its dark purple to almost black calyces. So for all my self congratulation through the summer at these flourishing specimens I STILL haven’t been able to successfully grow ‘Limelight’! Regardless of what I call it, this salvia is a hummingbird and bee magnet. Its sturdy structure sways in a light breeze and the dappled shade makes the bright green leaves dance. I love it!

The third of my plants was sited in slightly more sun. All got adequate water (they are are not especially drought tolerant) due to regular hand watering to supplement the minimal automatic irrigation of the bed and I’d give their planting positions an A+ for drainage.

While the last of the plants grew as large, if not larger, than the two in slightly more shade; many of the new leaves emerged somewhat curled. Even as the entire plant looked on death’s door it continued to put on new leaves with some emerging curled or crispy dark brown. Through this seemingly torturous growing process it too began the process of forming bloom spikes along with its neighbors. As the siting of the struggling plant pretty much obscured its closest and better performing neighbor, I gave in and cut it back to about 15″ a few days ago. It is starting to put on a few new leaves but they too are deformed–any thoughts out there in gardening land??

For those of you who would like to try Salvia mexicana, (‘Limelight’, ‘Ocampo’ or a more compact form ‘Lollie Jackson)’ give your plant sun to bright shade depending on your summer climate and well-drained rich soil. Protection from frost is essential although most are root hardy down into the 20°s. Your reward will be a summer of beautiful clean foliage followed by stunning fall flowers buzzing with nectar loving pollinators.

In other salvia news…

This unidentified microphylla/greggii hybrid–maybe Heatwave ‘Blaze’–is putting on a fabulous show as you approach my front door.