We started our day by spending a few hours in the British Museum so Dave could commune with the ancient Egyptians for a bit. Our hotel is only two blocks from the museum’s gate so it was an easy journey on a day forecasted to be unseasonably warm for London in mid-September. Not so much a gardener’s dream but pretty impressive nonetheless.

Our plan was to next travel to the Tower of London on the city bus–new territory for us as we have only ridden the Underground (tube) until now.  We made a small walking detour in search of a small garden behind St. Giles Church called the Phoenix Garden. I discovered this garden listed on the website TimeOut London in an article called Secret Gardens of London. Described as a small walled garden reached by walking down an almost hidden alley beside the church it was a bit challenging to find! Unfortunately a sign posted told us it was closed starting just the day before for some hardscape restoration and the addition of a new, larger and more easily seen entrance. Drat!

Back on track for the Tower we took 2 buses as the day warmed considerably. My desire to see this piece of England’s history stemmed primarily from a 1954 photo I have of my older sister and I holding hands with one of the Tower’s guards. That’s me on the left!

We took the tour which was lead by a Yeoman Warder (often called a Beefeater), saw the Crown Jewels and walked the walls of the Medieval Palace. I then approached one of the Yeoman Warders and showed him my photo. I learned several things–the first being that my mother incorrectly identified the Yeoman in the picture as a Yeoman of the Guard when he was actually a Yeoman Warder like the gentleman I was speaking with.  A Yeoman Warder is a full-time  job working only at the Tower. There are only 37 Yeoman Warders at any time and they must have 22 years distinguished English military service and have achieved a certain rank to be considered. They are part of the Queen’s bodyguard service. A Yeoman of the Guard is only called to service a few times a year for ceremonial purposes.

The Yeoman Warder I was speaking with immediately noticed something unusual about the uniform in the photo and asked if he could show my photo to the Yeoman Warder Archivist, David Coleman. I agreed and he was called. Mr. Coleman was very excited about the photo, asking for permission to copy it.  He told me that the uniform was from a period for which they have almost no photographic record. He pointed out that the crown on the uniform was still the King’s Crown but the letters below E II R are that of Queen Elizabeth. When the Queen was crowned a new style/shape of crown was designed for the uniforms (see the difference in the photo below.) My parents had arrived in England only a few months before Elizabeth’s coronation in June 1953. Mr. Coleman surmised that probably due to post WWII financial restraints only the letters were changed from G R (for King George) to E II R for Elizabeth with the old crown remaining until until it was financially feasible to replace. He shared that he was developing a project on the Yeoman Warders of the post WWII era and thought my photo could be an addition to that documentation. What fun! And really not a shrub or flower in sight!

Here a just a few other photos from our Tower experience.  The first was taken in about the same spot as the one from 1954. You can see in the first two the interesting juxtaposition of the centuries old Tower architecture with the modern glass building. The final two smaller photos are of the Tower Bridge which crosses the River Thames just to the east of the Tower walls. 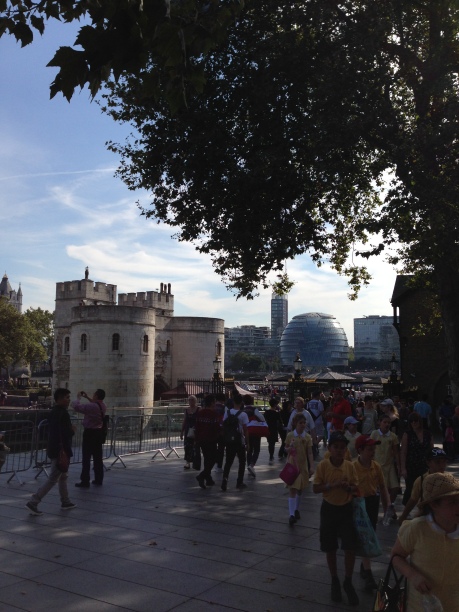 Oh, by the way…later the BBC News told us the day had been the highest temperature day in September in over 100 years–I guess we brought that Central California heat with us as a gift.!

NEXT UP: QUEUING FOR KEW…