The gardens of the Theodore Payne Foundation 2017 Native Plant Garden Tour have opened my eyes to new groups of plants to explore. My challenge will be to do the research on their adaptability to a colder winter and how to integrate the ones I like best into all ready established garden areas. I’ve pick just a few more to share in this post and one more and then we can move on to other topics and tours!

California native gardens are designed to complement many home styles from starkly modern to Craftsman post and beam but no architectural style seems to be as well suited as the quintessential Spanish bungalow.

This homeowner redesigned her back garden using many natives in 2010. The front garden was installed in 2013 and mixes meadow and coastal sage scrub elements with some carefully designed topographical changes, adding lots of interest to a small and originally flat lot. The large mounding plant front and left is a nice stand of Salvia clevelandii  ‘Allen Chickering’. 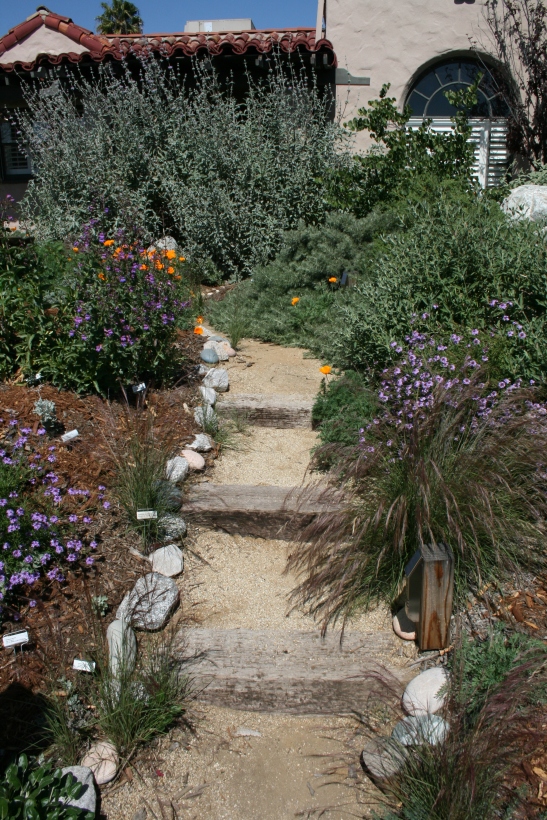 This railroad tie and compacted earth walkway leads you up and through the garden in a meandering fashion allowing you to see a wide variety of color, texture and form on the relatively short walk to the front porch. The grasses left and right are Aristida purpurea, common name purple three-awn. The lavender pops on either side are Verbena lilacina ‘De La Mina’. The darker purple mound to the right of the path is Penstemon spectabilis var. spectabilis or royal penstemon. 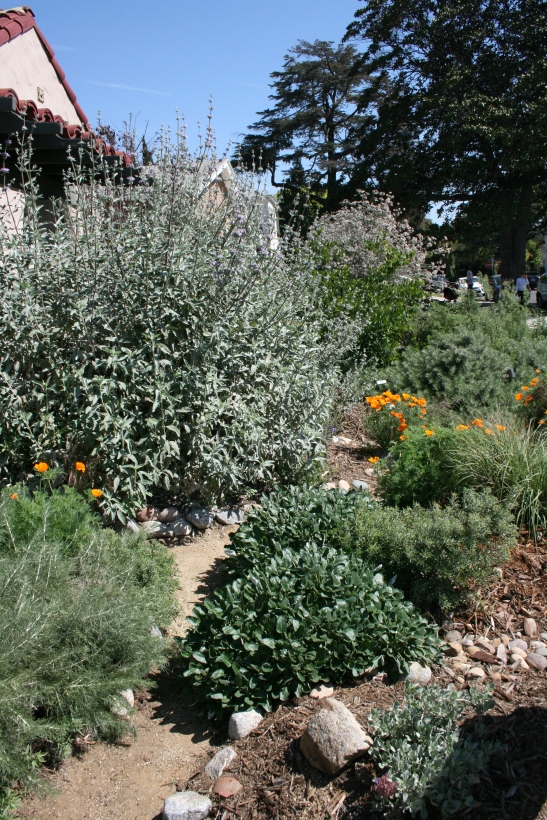 As the narrow path takes you to the porch steps by way of the small driveway you pass the phenomenal salvia which is almost as tall as the home’s roofline (look at the previous photo for a better perspective). The plant is marked Salvia ‘Vicki Romo’ but the Theodore Payne docent on site believed it was mismarked and actually was Salvia ‘Desperado’. My references list ‘Vicki Romo’ at a compact 3 ft. and this whopper is at least 10 feet tall.  Another interesting specimen is the Artemisia californica ‘Canyon Gray’ seen in the front left and again just behind the clump of orange poppies on the right. The grayish foliage provided a pleasing midpoint between the greens and the grayish white foliage of many of the garden’s selections. This artemisia is finely textured and very soft to the touch. I saw this in others gardens later in the day in large mounds 4-6 ft. wide. As with all artemisias, good drainage in a must. Repeated in this garden were many of what I now know are staples in the Southern California native garden: dwarf coyote bush ‘Pigeon Point’, red-flowered buckwheat (foreground above) and saffron or Conejo buckwheat.

The Kramer home has a deceptively large back garden–probably 3 times the depth of the front. The narrow, deep lot lends itself perfectly to a series of garden rooms. This is clearly the homeowner’s garden playground with a less restrained palette and lots of variety, including some of the finds you just pick up and dig in because you thought they looked interesting!

Just a short ride passing through the “village” part of this community led me to another wide flat street of small, neat homes. Parking was at a premium and I ended up about 2 blocks from the next tour garden. The short walk yielded several great yards so just imagine you are walking down the street with me and take a look! 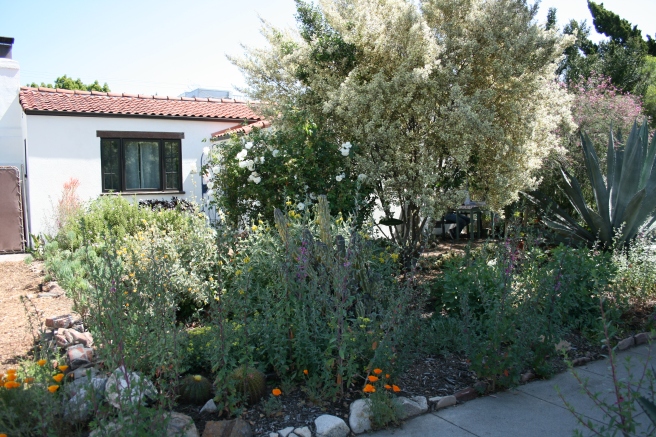 A side note–as I got out of my car I fell in step behind this couple walking home from their grocery trip to the little village area about 3 blocks away. They had their bags and their Starbucks cups in hand and were strolling home on a great day to be outside. The couple turned into their driveway just across the street from the garden which was my goal and I was momentarily jealous of the walkable, small city within a big city lifestyle they were obviously enjoying!

The Miller-Coon garden has been on tour every year since 2003. It is somewhat more relaxed and relies heavily on a mix of mature trees and shrubs and lots of reseeding annual wild flowers. 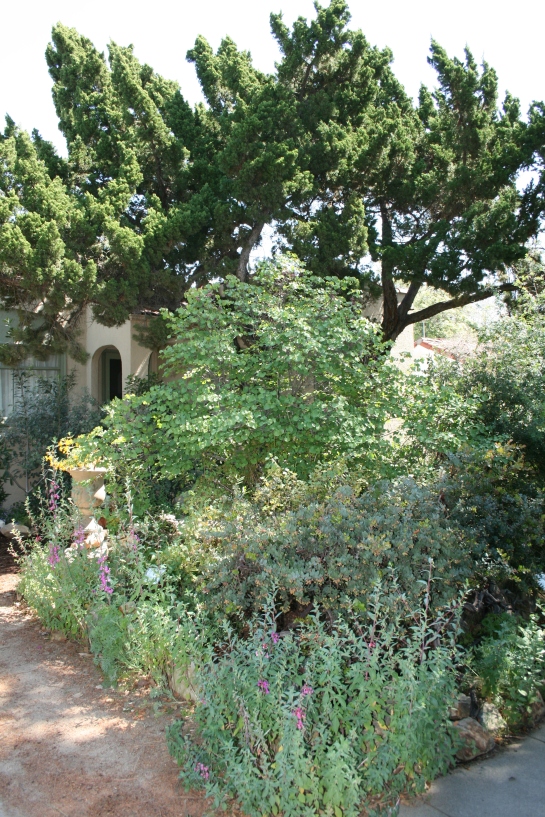 It is a diminutive front garden dominated by a large Torrey pine and 6 different native oak  species. In this photo you see the pine in the background, our native redbud, Cercis occidentalis, and one of several species of manzanita on the property. The violet blooms in the foreground are elegant clarkia (Clarkia unguiculata) which returns each year from seed.

My take away from the Atwater Village gardens–you can pack a lot of gifts in very small packages! Although both of these streets are definitely in the “flatlands”, you don’t always have to play the hand you are dealt. Both homeowners added dimension, interest and additional planting space to their gardens by altering their topography with very gentle mounds and curves.

NEXT UP–I travel to a unique neighborhood in Silver Lake where the historical standard is to have two homes on a single lot.