ANOTHER NEIGHBORHOOD, ANOTHER HILL–the Stirton garden in Silver Lake

A very narrow and winding lane took me to my next Theodore Payne Foundation 2017 Native Plant Garden Tour garden. This street is unusual because in its original state every lot had two homes on it. On one side of the street the lots are at street level and on the other they are mountain goat territory. Of course the next tour garden was on the mountain goat side! 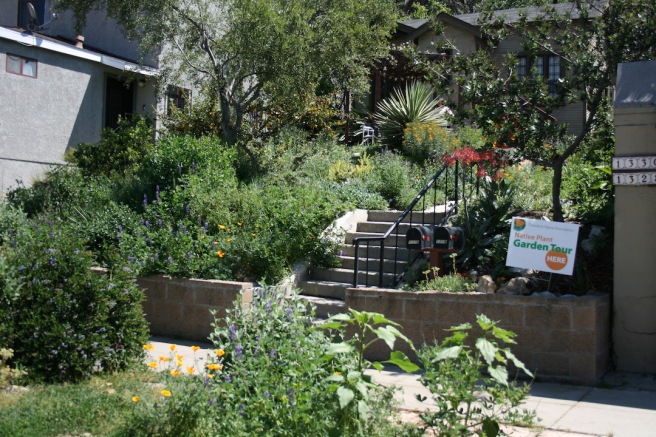 This is the lower part of the front slope which is held back from the side walk with a block retaining wall. This is one of only a few homes I saw which had what we always referred to as a “parking strip” between the city street and sidewalk. This parking strip was chock full of reseeding wild flowers and water wise shrubs, including several varieties of ceanothus and buckwheat. A very prominent player was the annual Lupinus succulentis, California native arroyo lupine. 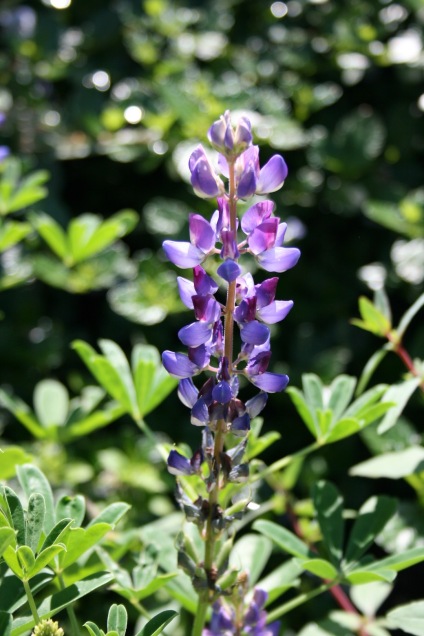 Even where not in bloom this reseeder’s lush green foliage fills the need for an erosion control ground cover. I was especially interested because this is not traditionally a drought tolerant plant. Although somewhat adaptable it generally requires ample water. This entire slope is hand watered so the homeowner has the opportunity to give the lupine extra water without jeopardizing the plantings which resent wet feet, i.e., ceanothus.

In that first photo you saw one of the two small homes on the property in its original state. It is now used as a rental. The homeowner has extensively remodeled the other home to sleek modernity and you would never believe they were once twins. 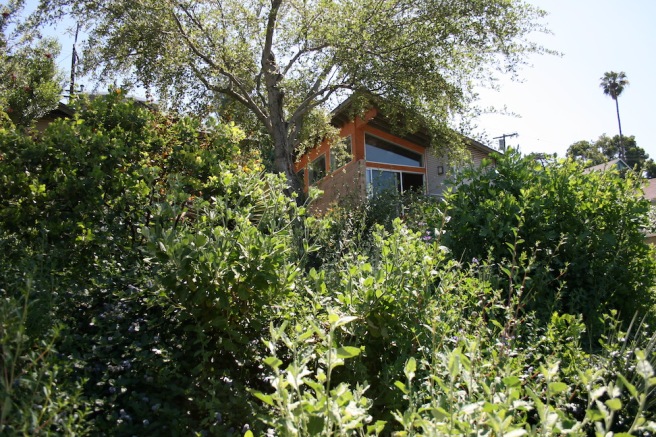 Looking up from the street you get just a peek of the clean lines and industrial materials used in the remodeled unit occupied by the property owner! The stairs leading to the homes sit pretty much in the middle and although both homes have small back gardens (only about 6 feet of flat area, then steep slope up), the front garden takes up most of the property. At various point on the concrete steps there are opportunities to step to the side and into terraced areas.

There was so much to look at–7 species of buckwheat (Erigonum), 4 species of manzanita (Arctostaphylos), 5 kinds of salvia, 3 cultivars of Mimulus (monkey flower). Oh my!

This healthy stand of Trichostema lanatum, common name woolly blue curls, was a testament to the care this gardener takes with his water. If there ever was a zero water/perfect drainage plant once established, this is it. The wide range of water requirements for these hillside plantings simply could not be met with a one size fits all irrigation scheme. Bravo to a man and his garden hose!

Many of the native landscapes lean heavily to the purple, blue and orange palette. This bright pink island mallow, Lavatera assurgentiflora, is native to California’s Channel Islands and grows quickly to a 12 ft. erect shrub with maple like leaves.

As this garden was a designated rest stop we had the opportunity to step into the more modern bungalow and take in the view this gardener enjoys every morning when he has his coffee on the balcony! Having once struggled with a garden which had several steep hillsides and not experienced success even close to this—I tip my broad brimmed gardening hat to this labor of love.

My take away on this Silver Lake hillside garden–not all natives are drought tolerant and not all low water users are natives. Mixing in natives and non-natives with high moisture requirements is do-able if you can commit to hand watering them. Cohesive landscape design can unite even the most diverse architecture!

LAST STOP ON THE TPFNPGT 2017 will be a tiny cottage garden in Jefferson, only a few hundred feet from I-10. I saw 19 of the 32 gardens on this year’s tour and will have given you a peek at 13. Time for us all to move on to new adventures. In less than a week I will head north for the Gamble Garden 2017 Gather in the Garden tour and in 2 weeks I’ll be back in SoCal for the Mary Lou Heard tour and Garden Conservancy’s Los Angeles Open Day.

P.S. I am experimenting with the resolution on my photos to try to free up additional space  in my WordPress media library. Let me know if you feel the quality of the photos had diminished to the point that it is not good for you. Thanks!!