This year’s Gamble Garden Spring Tour is even more walkable than usual–it looks as though all but one of the gardens is an easy stroll from the Elizabeth F. Gamble Garden. Three are within a couple of blocks from each other. Taking the docent’s instruction I headed down the alley and around a corner to see my third garden of the day.

SIMPLICITY IS THE ULTIMATE SOPHISTICATION 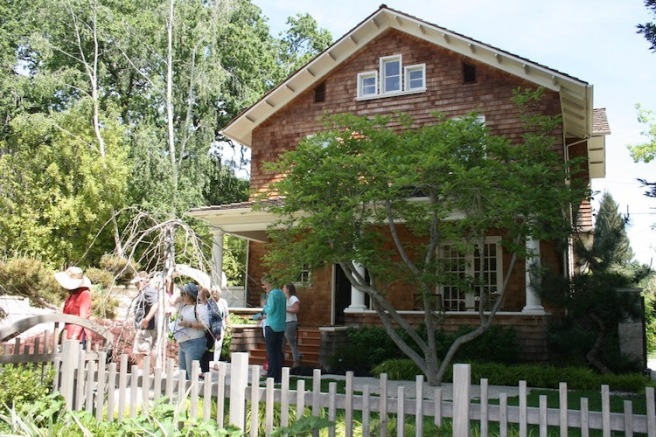 This 120 year old cedar shingled residence is home to a minimalist modern Japanese garden commissioned by a homeowner with an affinity for Japanese history, art and garden design. She also is a practitioner of ikebana and wished her garden to have materials to use in her flower arranging. Family friend and garden designer Jarrod Baumann gave her the garden of her dreams including her requested Moon Gate, an iconic Asian design throughout the world. 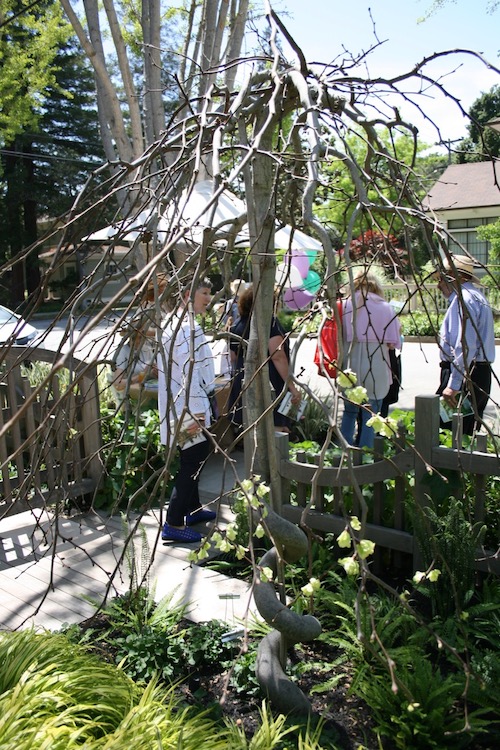 The garden gate is flanked by a pair of weeping, corkscrew elms which were just leafing out. A zipper style path of Devonshire cream limestone and Ipe wood planks leads to the front door.

Miniature gingkoes, Gingko biloba ‘Mariken’ take the role of foundation shrubbery on both sides of the front steps and supply glowing yellow fall color fall. The plantings on either side of the front path are not symmetrical but compliment each other with similar materials in free flowing swathes.

The planting scheme is restrained without being overly manicured. Areas which would traditionally be moss in Japanese gardens are clothed in a perennial lawn substitute which is labeled Kurapia–botanically it is Lippia nodiflora. A bit of post tour research revealed this not particularly new plant is being trialed and marketed as a drought tolerant lawn replacement. It is a dense ground cover no more than about an inch tall. If allowed to flower it is very attractive to bees. The flowers are sterile and thus does not seed itself. HOWEVER, what is not really covered in the informative Kurapia brochures online is that it is very invasive, spreading rapidly by rooting runners. I planted a single 4″ pot under a tree in a smallish bed and spent 3 years fighting to get rid of it. It will overwhelm any other plant material and run under and over hardscape borders intended to contain it. I reckon this homeowner has it edged regularly. In this garden it was absolutely beautiful but I would caution buyer to beware! The Kurapia is bordered with a black mondo grass and sparkling Hokone grass, Hakonechloa macro ‘Aureola’. The low fencing encasing the front garden echoes the style of the zipper paths.

The shade of mature redwoods give this front garden which is on a busy corner, a welcome sense of enclosure and beds in dappled shade. Notice the large white concrete boulders which punctuate both sides of the front garden. Their smooth surfaces and pale color mimics the cream of the wall and path stones.

A magnificent cut-leafed Japanese maple, Acer P. dissectum ‘Sekimori’ stands as a sentinel to the side garden entrance in its stone planter. 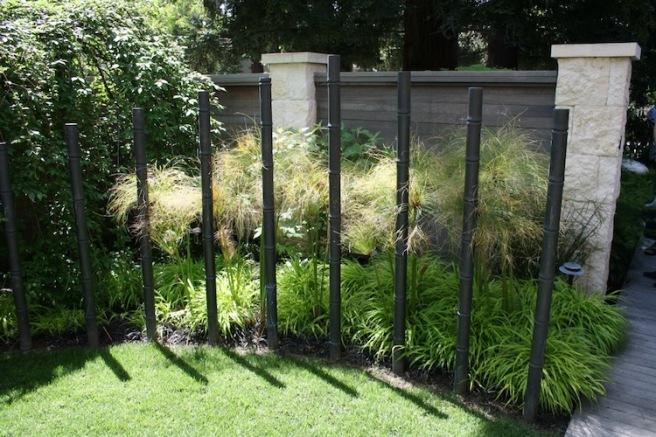 The side yard is anchored by a rectangle lawn surrounded by mostly green plantings. The vertical bronze sculptures of bamboo stalks on both ends of the lawn are meant to evoke Inari shrines.

Just inside the gate and up against the house is this weeping cherry tree, one of a several used as a hedge, under which is tucked a small garden stool just in case you need a quiet spot to hide!

The white flowering quince also planted up against the house is prized material for late winter flower arrangements.

Porches on two levels at the back of the house are draped in wisteria–white above and purple below. 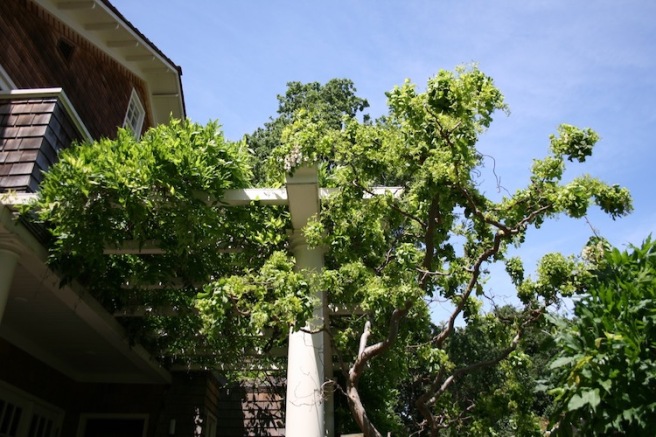 Also planted on the front edge of the arbor is a Robinia pseudoacacia ‘Twisty Baby’, a deciduous, multistemed shrub in the black locust family. It’s contorted form and relatively small size make it an eye-catching patio specimen.

As we’ve reached the back of the side garden the bronze bamboo and plantings are repeated. They mask a wee potting bench and utility area.

A narrow Ipe planked path carries us to the opposite of the home. The small cottage ahead is used mostly for flower arranging. 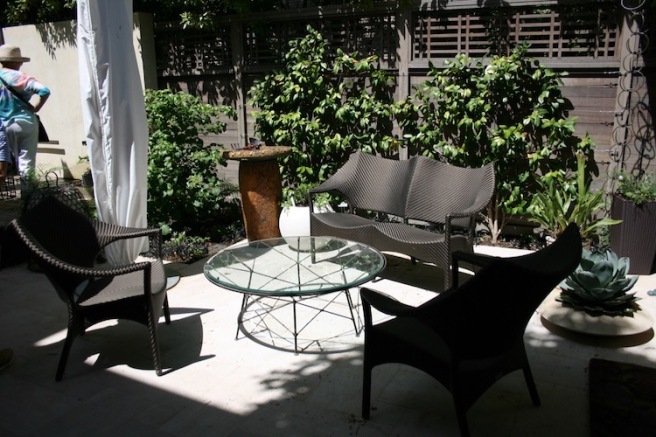 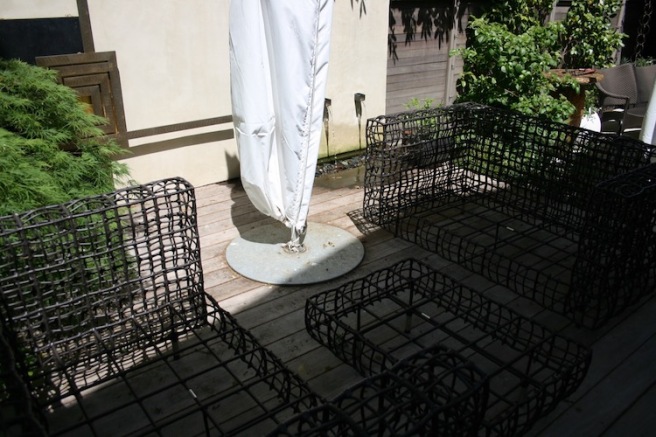 Adjacent outdoor seating areas, one on a stone surface and the other stepped up on a wooden deck offer plenty of places to visit with friends and a glass of wine. The woven iron sofa and coffee table are massive yet airy–I’m not sure if cushions would usually be in play here.

Pots throughout are kept simple and spare. This large amber colored crystal was an unexpected piece of nature’s own art. 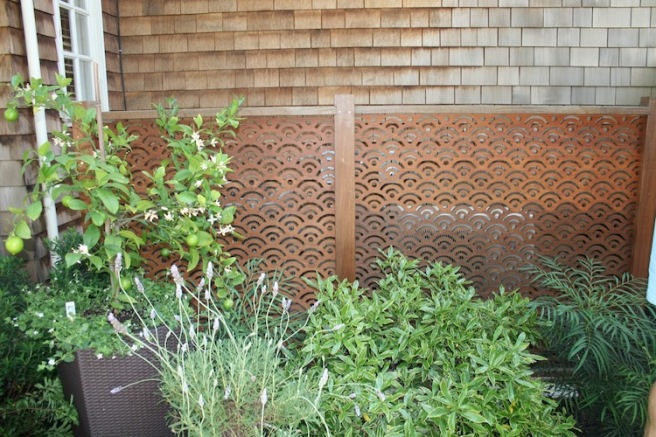 This designer left no detail undone–you saw the power meter, and now, necessary garden equipment (and possibly AC units?) is hidden behind a beautiful Ipe screen based on a traditional Japanese fan design. 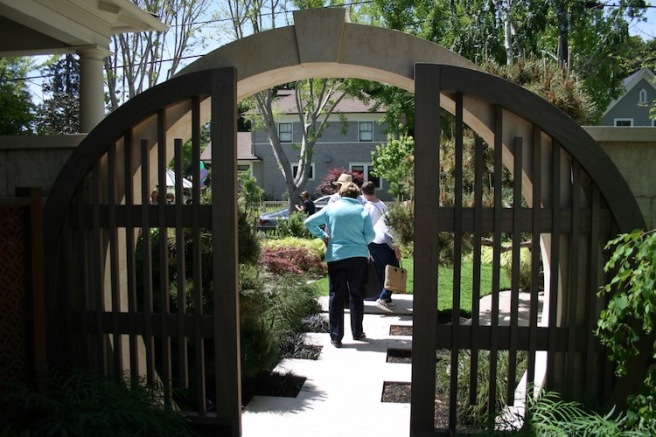 The Moon Gate leads visitors back into the front garden via another zipper limestone path.

This sculptural Japanese pine, at least forty years old, anchors the front garden on this side of the house. 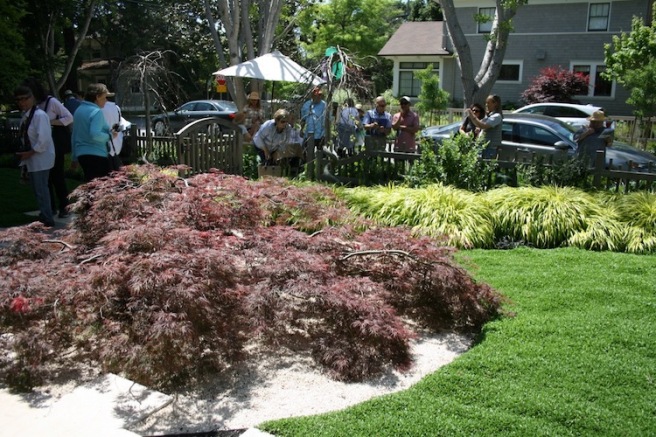 A dwarf red cut-leafed Japanese maple hovers only inches above the ground and seems to float in a sea of crushed limestone. The Kurapia ‘lawn’ and Hakone grass elements tie the front garden’s two side together.

Leaving the garden I can’t help but take one more glance at the Moon Gate, this time as it’s seen from the front.  This garden is simple and serene without feeling fussed over or complicated–Glee, this one’s for you!