For two days our tour buses passed a lovely riverfront of some kind and a huge REI as we traveled back and forth from our garden tours in the communities surrounding Denver. I am not a camping and hiking kind of girl but both my adult sons are very into kayaking, fishing and all things outdoors so I decided a trip to what I soon learned is the flagship REI might give me some new street (forest?) cred with my boys. Who would have thought my second retail adventure in Denver would take me back to the birth of this mile high city?

It was overcast as I approached Confluence Park and REI, walking the mile or so northwest on 15th Street from my hotel. This photo is taken from East Confluence Park where there is a pretty shade pavilion and this great stone leaf in which was nestled a little boy wrapped in a wet towel, fresh from some play at the river’s edge.

In fact, every one of the several kiddos in that family had to take a turn in the leaf’s embrace before they all packed back into their vehicle and I got my turn. 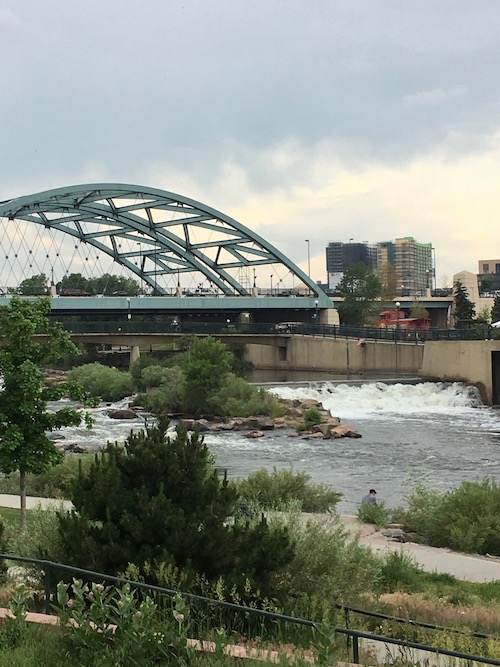 Confluence and East Confluence Parks are two of Denver’s most urban parks. They encompass the green space at the confluence of the South Platte River and Cherry Creek which is just north of Denver’s Lower Downtown historic district. During the Gold Rush it was at this junction that gold miners established a settlement for trade and commerce in 1858. When the gold panning no longer yielded riches, the settlement reinvented itself as the supply hub for new mines in the mountains. The city of Denver eventually grew out of this mining camp. 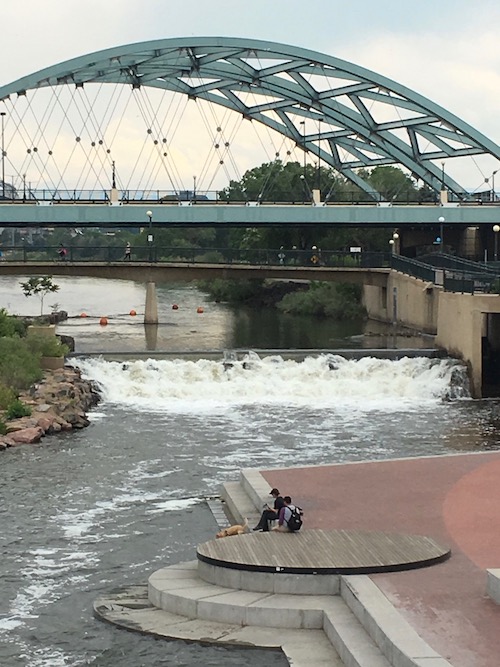 From the 15th Street bridge over the South Platte River, you can see quite far upriver. Shoemaker Plaza on the river’s bank is a venue for outdoor concerts and picnics. Biking and hiking trails run along the river. On this cloudy day there were a few folks relaxing on the banks and a big yellow dog who was having a great time.

REI’s 90,000 square foot Denver flagship store occupies the historic Denver Tramway Power Company building over looking Confluence Park and the river. It has its own Starbucks with a lovely outdoor seating area which was full of young people sipping their coffees and working on their tablets while enjoying at the fresh air and the sound of the rushing river.

The building housed the boilers and engines used to generate electricity for the streetcars which were the main link from Denver to the suburbs. Water from the river cooled the powerhouse’s turbines and there was easy access to coal due to adjacent rail lines. At the height of its operations, the Tramway Company owned 160 miles of track and more than 250 streetcars. The system was decommissioned in 1950 and the building was subsequently used as a warehouse and later, to house the Forney Historic Transportation Museum. REI acquired the property in 1998.

REI Co-op was born in 1938 of the need for a better source to obtain a quality ice axe for a reasonable price–which explains its choice of door hardware. Today it has 154 stores in 35 state and the District of Columbia and more than 13,000 employees, all dedicated to bringing consumers top quality outdoor gear and experiences.

REI’s commitment to the careful use of resources made the rehabilitation of this historic building a project which supports the environmental concerns of its members both through responsible business practices and direct support of conservation causes.  There is an amazing amount of information about this rehab project online–just Google REI Denver Flagship store or REI Denver Tramway Power Company if you’d like to read more details.

Being a REI virgin, I thought I might participate in whatever activities were going on in the store or pick up a small souvenir. I felt pretty foolish asking some passerby to snap my photo in front of the store. More so, letting anyone else see me taking a selfie in front of the store!

Ok, so maybe experientially this might not be for me–the 40 foot tall Pinnacle. Although I did find out that a class was available for beginners after which I could have my first pint of beer free at Denver Beer Company.

Maybe a kayak is more my style… 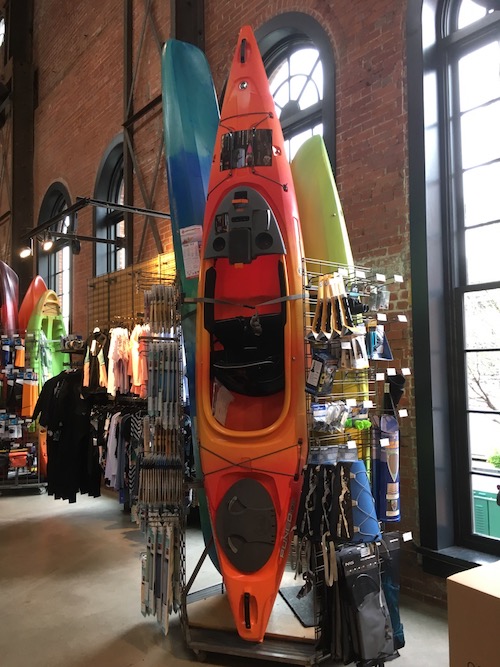 Or one of these colorful sleeping bags… 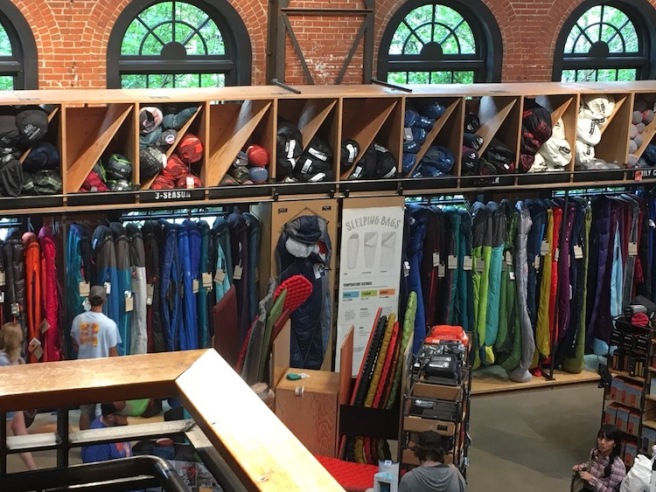 From the second floor catwalks I could really get a sense of the structure of the building and what a great job REI did preserving what they could and making their needed improvements in a  style that was complimentary to the inherent industrial look. My first REI so no way to know if they all look like this!

Feeling ever so much more outdoorsy than I did when I walked in, I took a pedestrian bridge back across the South Platte towards Centennial Park.

I ventured on to Centennial Gardens and saw some more fun outdoor public art on my way back to the hotel–another post for all that.