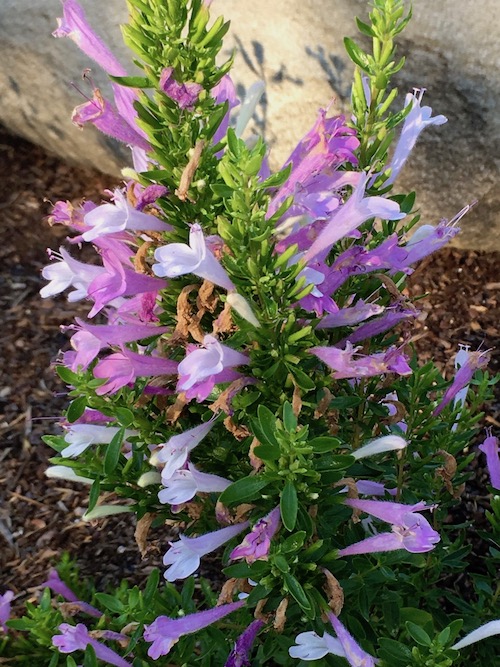 I’ve taken a couple of photos of this addition to my new lawn free front garden a few different times since it was planted in April. I just never quite got the post done and then the next set of pics would look even better. Sealing the deal to feature it is that it has sailed through several 100°+ days since June 1st–a good sign that it may hold up to our hot, dry summer.

Poliomintha maderensis Lavender Spice™ is a member of the mint family and commonly called Mexican oregano. Not an oregano but it is native to eastern Mexico, requiring full sun in all but the hottest regions. It is a loosely upright evergreen shrub supposedly maturing at about a three foot mound. The long tubular flowers open lavender, deepen to purple, and finally fade to white; all three colors are present on the plant at the same time–much like the blue to white fading Brunsfelsia pauciflora ‘Floribunda’ we call yesterday-today-and-tomorrow.

It has grown steadily

I had no small sense of unease on my Denver trip with lots of new plantings in the front garden, many untested as yet to heat, but everything held up fine with no extra attention or water other than my normal irrigation schedule–whew! I’ll let you know how Lavender Spice™ fares as the summer wears on.